Darkened – Into the Blackness [EP] 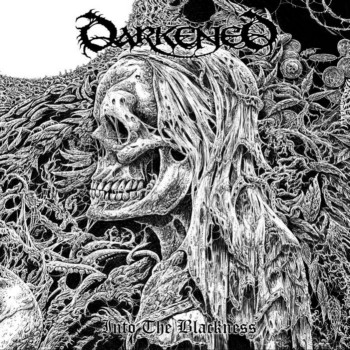 Dictionary definition “A Supergroup is a band comprising of musicians already famous for playing in other groups”. “Supergroups” often offer so much but then fail to deliver. Whether it’s the phrase “too many cooks” which ultimately results in a myriad of ideas being added to the theoretical song writing pot that results in the final product being a disjointed mess, who knows?

Enter Darkened, by definition a death metal supergroup formed in 2018 and comprising of multinational musicians that can add bands such as Funebrarum, Memoriam, A Canorous Quintet, Ordo Infernus, ex-Carbonized and ex-Bolt Thrower to their individual resumes.

Unsurprisingly because of the quality and pedigree of musicianship on display here (and the current state of the music business “this shit sells why take a risk on a new unheard band??”) Darkened have been snapped up by Chaos Records and have tickled our salivating taste buds by dropping this EP prior to a promised full album release. However It may appear that my scepticism has been misguided as the four songs tabled for us here (3 songs really – the first and title track is really just a brooding intro with some soprano warbling) are really quite good!

So Title track/intro aside we kick off with “The Offering” – This song opens up with a melodic catchy riff (that you’ll be humming to yourself for weeks) before sinking into Old School Death Metal territory, then just after the minute marker hitting us with some stomping Bolt Thrower style riffage. Fantastic vocal performance including the chanting that comes in at the later third of the song. “Darkening of my soul” opens up with a doomy menacing intro riff before it goes full Bolt Thrower on us with the double kick drums pounding away. The drums I hasten to add sound like drums and it’s refreshing to hear an acoustic kit again!! Huge fat crunchy guitars and well thought out guitar solos lead us into “Undeemed” another huge stomping metal intro riff before…yes you guessed it we are double kicked Bolt Thrower style into another great guitar solo then eventually an acoustic guitar outro and we are done!

All in all this EP is well produced, mid paced, catchy, with flowing riffs, crunchy guitar tones, thought out solos with small keyboard flurries for effect. The vocal performance by Gord Olson is particularly stand out for me!

This is a definite worth a listen for fans of old school death metal particularly if you enjoy your Bolt Thrower with a touch of Swedish DM melody for affect! (Godless)