Under the Church – Rabid Armageddon 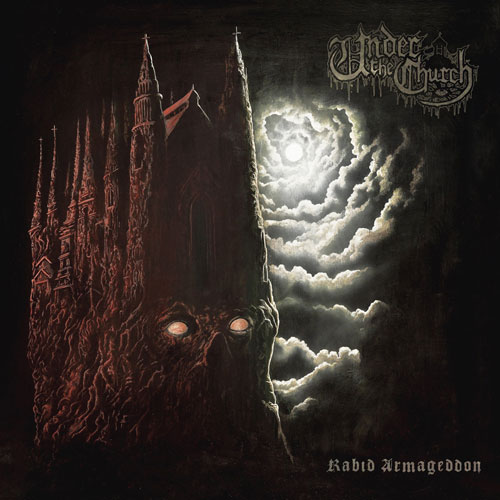 If you have read the previous issues of VM-Underground, and especially my reviews…Who am I kidding? Of course you did! You probably have the same exquisite and distinguished taste as I have and kept nodding along while reading my little scribblers. Of approval that is! In that case you will know I’ve been an Under The Church enthusiast from day one. So after the demo and the EP, my hands were itchin’ to get hold of the debut full length “Rabid Armageddon”. And sure, I can point out the Nirvana 2002 cult status to give Under The Church a boost, but this band doesn’t need a boost of any former band tag as it doesn’t do justice in any kind of way. “Rabid Armageddon” has the huge strength from itself, to cope World Domination on its own as this is one of the best Death Metal albums in the last 10 years. Hands down! Of all Swedish Old School Death Metal bands, Under The Church is maybe the one with most energy in its songs. Drums are pounding like Odin’s hammer on the Gates of Valhalla, because he locked himself out. Something like the Asgard version of Fred Flintstone screaming “Wilma” at the front door…The riffs are to the point and right in your face, the guitar sound is roaring and growling while the solos are like a howling wolf in a deep forest. Listen to “Sodomy and Blasphemy”, “Rabid Armageddon” or “Trail of Cthulu” to convert yourself during the putrid funeral rites of Under The Church. One of us…one of us…. (Ricardo)