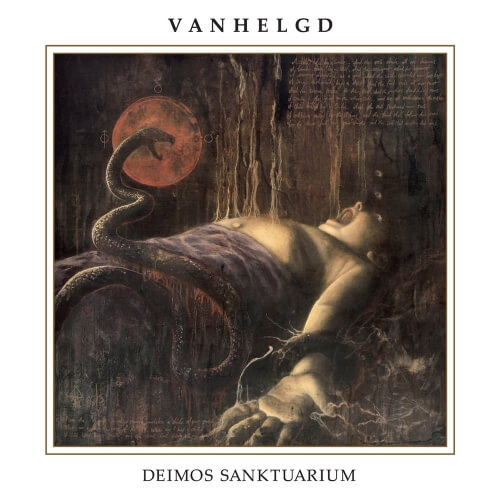 Formed in the year of 2007 by Björn Andersson (drums), Jimmy Johansson (guitars, backup vocals) and Mattias Frisk (guitars, vocals) with the intention to play dark, blood soaked death metal in the vein of the old masters, Vanhelgd quickly earned their reputation and became a favorite among the underground fans. Slightly slower than its predecessors but never giving up on its devilry, “Deimos Sanktuarium” keeps Vanhelgd’s instantly recognizable sound spread out among seven tracks of pure obscure Death / Doom, opening with the brilliant “A Plea For Divine Necromancy” and closing with “Här finns ingen nåd”.

Every song has all their trademarks included, with stunning guitar riffs, combined with the perfectly synchronized rhythm section and the unmistakable vocal style of Mr. Frisk. A special note for Year Of The Goat’s frontman Thomas Sabbathi, who arranged and performed the choir orchestration on the track “Silent Observer”. Vanhelgd’s album #5 artwork and layout was once again brilliantly designed by the band’s frontman Mattias Frisk (mattiasfrisk.com), who has done artwork for bands such as Ghost, Maim, Entrapment, etc. (Antonio)