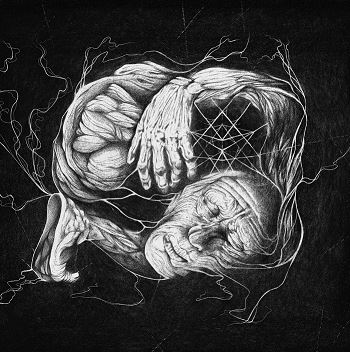 Being familiar with their debut “Vexamen” from 2016, I was very interested to hear what`s coming next from Verberis, a band from New Zealand with not much information about them. This time Pulverised Records takes the duties in releasing this EP with a length of over 30 minutes. This 2 track EP is huge in length and epic in its proportions for an EP. The productions feels natural with a slight of reverb from hell adding the necessary evil to the sound. There is much going on, shifting from very silent passages to ultra-doom laden blackness (Vhorthax?), abrupt speed eruptions with killer breaks and a distant voice screaming…yelling…calling thy master forth. The music is labirynthian, morphing various times, embracing one`s body with single note playing. Hypnotic, dangerous and before tons of heavy unknown mass collapse over the listener with some marching drums and single picked chords blowing up until chaos is unleashed. Fantastic! The drum patterns are awesome, always helping the songs to reach their maximum potential. This record has got a lot of dynamics. Imagine Grave Miasma, mid era Tribulation (for the softer, cleaner parts) and some Necros Christos groove with the feel and progressive nature of Negative Plane paired with your oceanic craziness and the dark aura of the current Icelandic scene. Killer follow up to the debut and a strong record to all extreme metal fans out there. (DPF)