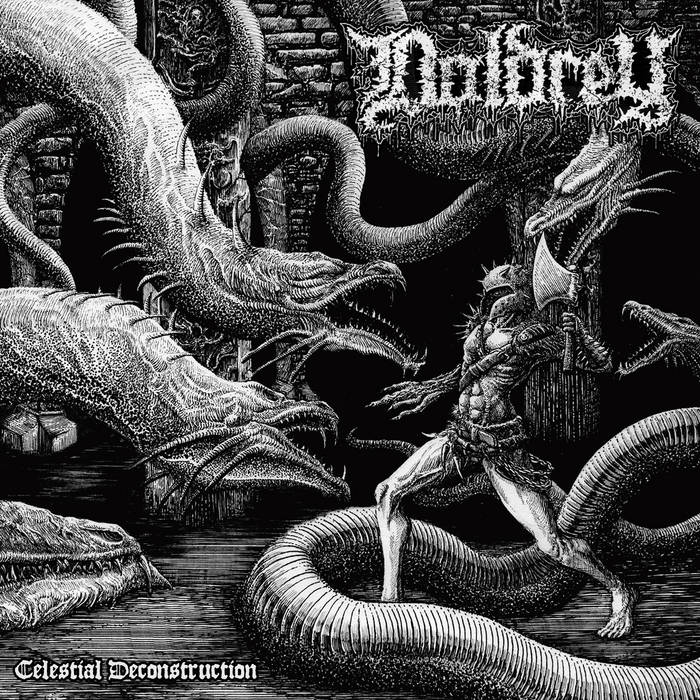 Doldrey consists of members from the Singapore Hardcore/Punk scene, playing in former and current bands such as Abolition A.D, Blood Pact, Zodd, Stiletto and Sial.

In a short space of time Singapore’s underground resistance Doldrey has amassed quite a following amongst the local maniacs like myself and probably elsewhere, somewhere obscure as faraway Alaska as we are talking with their Nihilist-tic “Invocation of Doom”. I fucking hate it when people tend to mislabel them and box them as Death Punk, Blackened Hardcore Blah Blah Blah…

The band’s debut EP “Invocation of Doom” was a thick slab of premium wagyu D-Beat Hardcore, Crust Punk infused with some really blackened Death riffs, and by riffs these guys bring heavy crushing HM2 riffs in style unseen here in my home country for a while without too much emphasis on imagery and by now the overdone shitty War Goat cartoon covers with bullet belts, machine guns and blow job nuns that you would find from releases by Bands predominantly from this region.

“Celestial Deconstruction” is certainly Proto-Death Metal that displays a fusion of classic Death Metal, Hardcore Punk, Crust Punk effortlessly and they are so good at their trade-craft that “Celestial Deconstruction” could possibly be this young band’s ticket to a major label signing. We from the tiny red dot called Singapore can now proudly add Doldrey in the league of Wormrot and the other legendary bands that came before and we have Pulverised Records to thank for the recent revelation that is Doldrey (and another Grimy Death metal bastard label mates Offset – Go check out their “Bent Benevolence” EP!).

Doldrey display a sort of Fuck Off thrashing attitude in their music which seems to appeal to fans of the newer era of crossover and maniacs of Death Crust. Lots of Bombs of Hades, Power Trip and Bastard Grave vibes in here for those who are into these Bands. With unparalleled power Doldrey have arrived on this debut record with a ballistic missile fuelled listening experience which totally destroys!