Nominon – Remnants of a Diabolical History 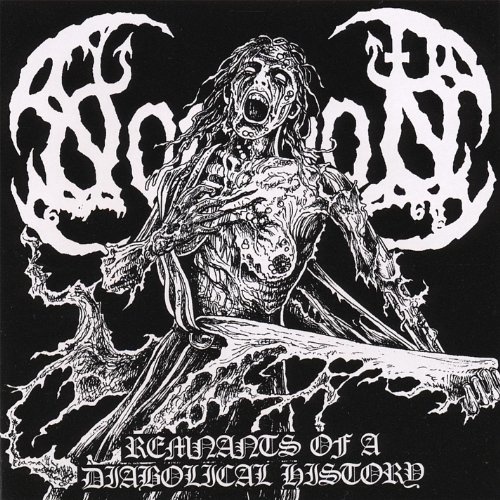 One of my favourite Swedish death metal bands of this moment is Nominon. Although this band is active since 1993, they only released two full-length albums and several EP’s. Singapore based Pulverised records has now released the CD “Remnants Of A Diabolical History” full of material which was found on cassette, vinyl or was not released at all.

The tracks on this album are coming from the 7” EP “Blaspheming The Dead” (tracks 2, 8), the cassette version of the before mentioned 7” EP (10) and from the promo ’97 (tracks 4, 11). Also, three covers of Voivod, Whiplash and Repulsion are to be found (tracks 3, 7 and 10) and some unreleased material, tracks that are sounding slightly different then the well-known versions (tracks 1, 9, 5) as well as one unreleased track (track 6).

One can expect an orgy lasting 43 minutes of Swedish death metal in the most pure form thinkable. The musical approaches of the three covers are superb. With the original versions in mind, Nominon has succeeded to give these songs their interpretation without doing any harm to the original composition. Listen to “Live For Violence” and you will understand. The songs from the “Blaspheming The Dead” 7” and cassette are typical Nominon tracks and have a little black metal influence. It is funny to hear how differently the Repulsion cover sounds compared with the two other tracks from the some 7”. The best songs on this compilation album are coming from the 1997 promo. “Cemetery Of Life” can best be described as a death metal song that could be responsible for the revitalization of underground death metal. It is by far out the best track on this album. Although it reminds of Unleashed in there early days, the guitar riff is the best Nominon has written. “Diabolical Bloodshed” is the only song on this album that never was released. It would have fit well on their “Recremation” album.

I can only end this review with the recommendation to get a copy. That is the only thing I can do. (Martin)