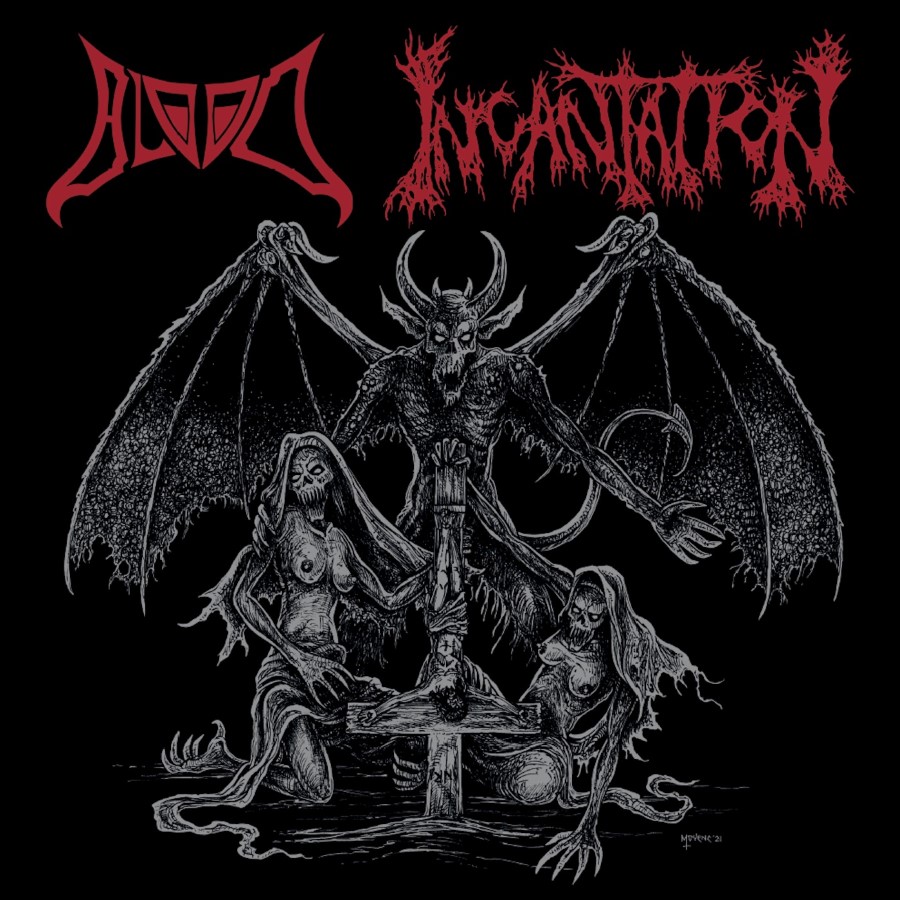 This is the sort of split EP that you knew was coming, I can imagine the chuckle the label and bands had when working out the idea. Apart from the first 12” EP and maybe to a certain extent, the debut album too, I never cared much about Blood Incantation, I always thought it was a much over-hyped band that in the end wasn’t able to deliver all that interesting music. Even without having heard one single chord of this split 7” EP, I was already sure I preferred it above any of Blood Incantation’s work.

Germany’s Blood opens the split EP with their trademarked, crude sort of Grinding Death Metal. This time the emphasis is clearly more on the Death Metal side, offering something that is pretty reminiscent to pre ‘False’ Gorefest, both in those slower and heavily chugging riffs as well as the bowels-out sort of vocals. Both tracks are delivering a pure and savage kind of bludgeoning Death Metal stomp that will leave no Blood fan unsatisfied.

Incantation, on the other side, offers one track of their well-known doom-laden Death Metal, rather slow and pretty brutal at the very same time. Incantation’s sound is a little more flat compared to Blood, making it sound a little tame, which is a little unusual for the band. But the rawer recording does make is more reminiscent to the way Incantation sounded in their early days, a bit rougher in nature, flatter in sound and overall just a tad clunky. Only when the track speeds up a little around the midpoint of the song, it gets a bit more of that sound the band adopted halfway in their career.

All in all I think this split EP is a nice one for those Death Metal fans that like their Death Metal a little more primitive than the (overly) sophisticated kind sported by Blood Incantation. And, needless to say, fans of Blood and Incantation can blindly get their hands on this piece of vinyl (released on both black and red vinyl). And, finally, not that it should be seen as any sort of competition, but for me personally, Blood did a slightly better job on this EP, delivering quite a solid slab of old school Death Metal.