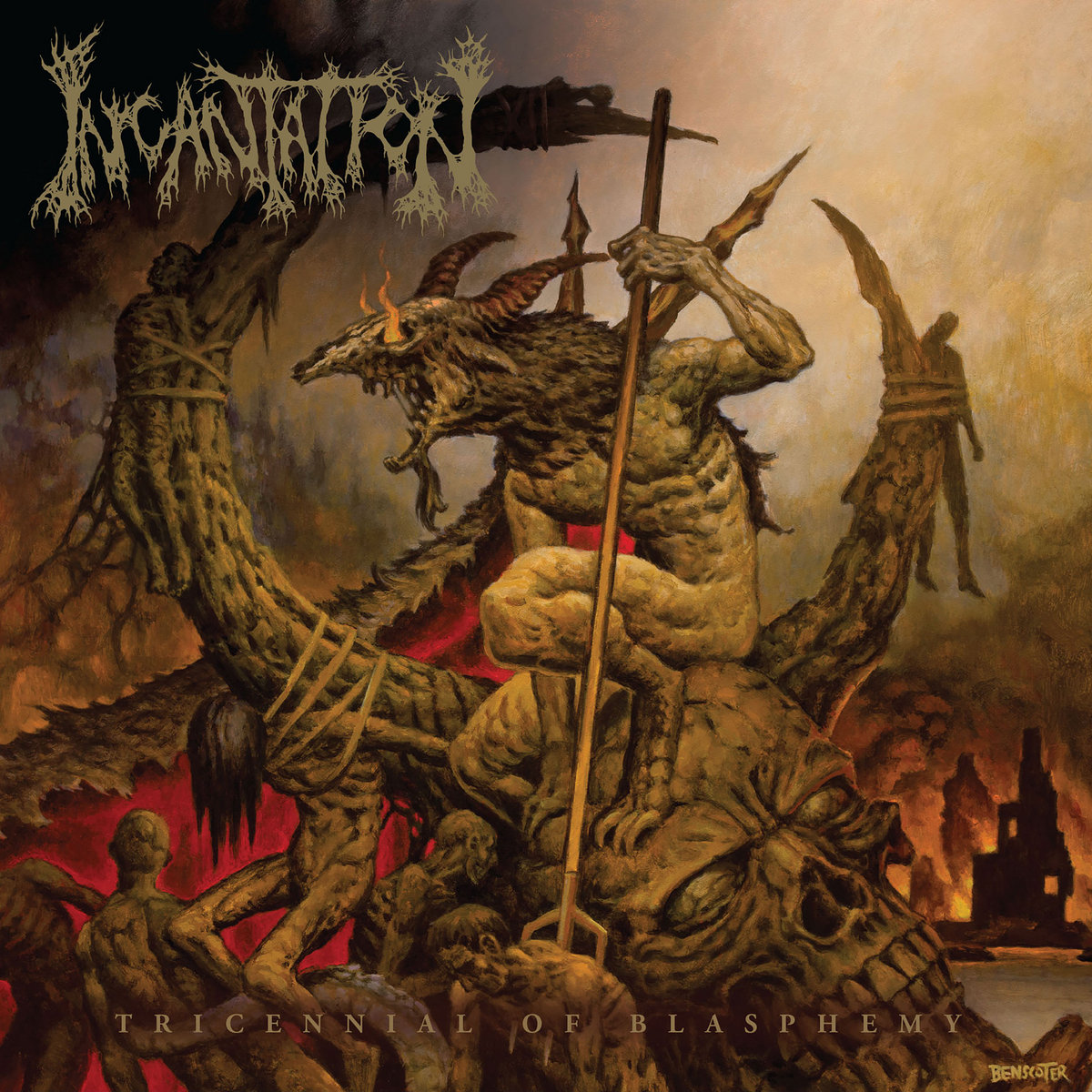 What is dead may never die. Sometimes it feels like yesterday that Death Metal arose from the graves of the underground to take the world by storm. But of course, the reality is that we’re all a lot older than we sometimes realize, and many of the strongholds of the genre have been around for decades. One of the legendary bands that helped shape the US Death Metal scene is Incantation. Formed in 1989 and still featuring original member John McEntee, the band celebrates their 30th Anniversary with the release of `Tricennial of Blasphemy’, a massive compilation featuring 31 tracks available on 2CD or 3LP.

When thinking of Incantation I cannot separate the parallels with their former city mates Immolation. While both bands are appreciated by the dedicated followers of the scene, neither band reached the status of for instance Cannibal Corpse and Morbid Angel, headlining massive Death Metal events. Remarkable, because both Incantation and Immolation have always had their own dark and twisted sound and more importantly, consistently released high quality albums throughout their entire careers. The recent revival of the old school Death Metal scene that features a prominent so-called cavernous sound should be considered a tribute to the persistence of a band like Incantation, that cemented a foundation on which the scene once again flourishes. Therefore, more than anything, ‘Tricennial of Blasphemy’ feels like a homage to a band that has held the US Death Metal flag high through highs and lows of the genre.

The material on `Tricennial of Blasphemy’ is a collection of mostly rarities, unreleased material and live tracks that span the entire career of the band. The compilation starts off with two previously unreleased tracks entitled ‘Pest Savagery’ and ‘Ordained by Night’s Will’. Both tracks sound fairly recent, with a good, deep and dark production.  The next track, ‘Obelisk Reflection’, has a similar sound to the previously mentioned tracks and was previously exclusively released on the `XXV’ vinyl compilation. The subsequent ‘Nefarious Warriors’ appeared on that same compilation as a re-recorded version of an original that appeared on the `Tribute to the Goat’ release. With ‘Absolved in Blood’ we find another track that not many people may have heard, as it was part of the ‘Afterparty Massacre’ soundtrack. Rounding off the selection of rarities is ‘Horde of Bestial Flames’, a track that was part of the ‘Diabolical Conquest’ recording sessions featuring then vocalist Daniel Corchado. Fans of Incantation will probably have reason enough to purchase this compilation for these tracks alone and will be pleased to find these are all of up to par with the high standards of quality of Incantation material.

In ‘Degeneration’ we find one of two covers on the compilation, in this case covering a song by Revenant, the old band of John McEntee. The other cover in the track list covers none other than ‘Hell Awaits’ by the mighty Slayer. In addition, we find slightly different versions of several studio album tracks that appeared on compilations: ‘Ethereal Misery’ which ended up in a different version on ‘Diabolical Conquest’ and ‘Emaciated Holy Figure’, a track that was released in different versions on both ‘Mortal Throne of Nazarene’ and ‘Upon the Throne of Apocalypse’. Another addition of note is the inclusion of the three tracks that appeared on the 1996 promo, a unique recording featuring none other than Will Rahmer of Mortician fame as session vocalist.

As if all these rarities, covers and alternative versions weren’t enough, `Tricennial of Blasphemy’ also contains several 7” EP’s: ‘Scapegoat’ from 2010, ‘Thieves of the Cloth’ from 2006,  ‘Deliverance of Horrific Prophecies’ from 1991 and the legendary ‘Entrantment of Evil’ recordings from 1990. With these final two recordings included, all vocalists that have served in the band including original vocalist Craig Pillard appear on this compilation. The final seven tracks on the record are live tracks recorded in the past decade in various locations around the world. Despite the variation in where and when, the sound of each of the recording is of solid professional quality. You won’t find shaky Youtube conversions here.

Everything together this is quite a monstrous collection of Incantation material, totalling over two hours of rare or never released material, hard to find EP’s, alternative track versions and live recordings. The material spans every era of the band with every vocalist that recorded with the band. This isn’t by any means a collection of the band’s best-known tracks, but rather a unique opportunity to fill the gaps in your collection. While there is obviously some variation in production from recording to recording, the sound quality is great across the board. `Tricennial of Blasphemy’ is a glorious way to celebrate 30 years of Incantation for the devoted fan, the Death Metal fan that always meant to add more Incantation to their collection, or even for those trying to find out what the band is all about. Listening through the tracks it’s obvious how consistent, dedicated and devoted Incantation has been to their Death Metal.