Bonehunter – Children of the Atom 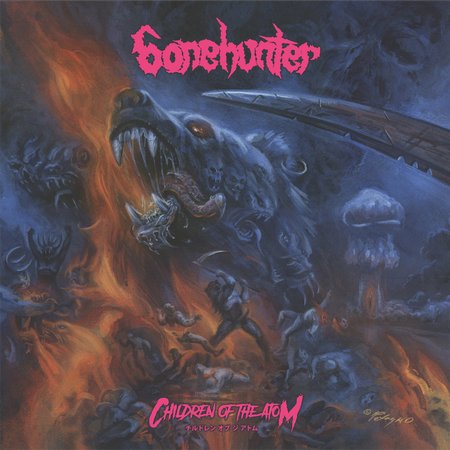 The metal gods came down to cleanse the world of shitty music. 2018 as this year has proven to absolutely smash everything in it’s wake. It leaves us with a pile of of dismembered bodies with shit streaming of the sides. The guardian is a huge bearwolf that pummels and scratches the wimps and posers that almost make it to the top. As the bodies continue to pile there are a few stragelers left. He finishes them off. All with a huge fucking boner.

Bonehunter have stormed the gates and broke them down with their new album, “Children of the Atom” With the ominous build up in the opening track to, “Initiate the Sequence” it does just that, Initiate what’s about to be a ripping album full of thrash riffs that will keep you headbanging until you yourself have a massive raging boner. Okay enough boner talk, maybe. Coming off their last album, “Sexual Panic Human Machine” these Finns keep up the onslaught of riffs that seemingly never end. With tracks named, “The reek of Reaper’s Sythe” and “Cybernetic Vampirism” all of the names represent the songs greatly. Fun, energetic, and blistering.

Like dentists with toothpaste. 9/10 metal heads would approve this face melter and the one left out is a poser. Bow your head to the wolf, or else face the wrath of the massive dong. Okay that was the last one. (JonG)