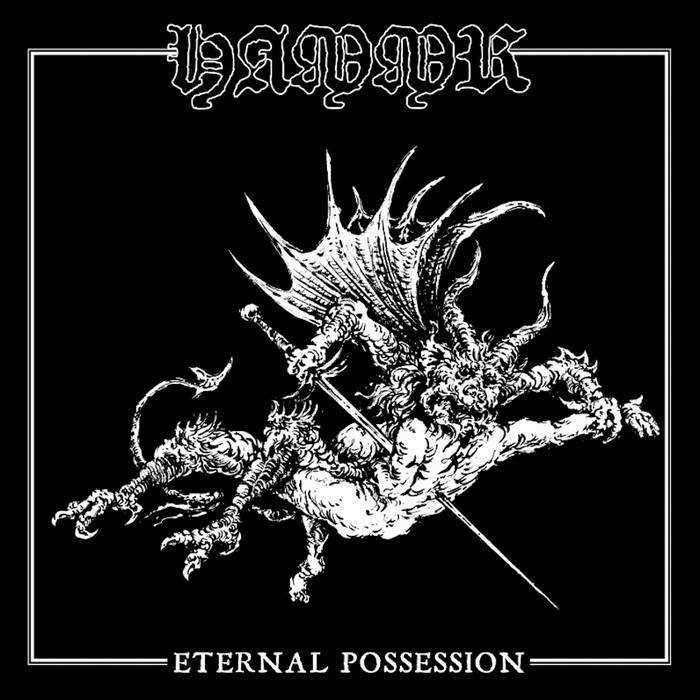 If you have high regards for albums like Bathory’s self titled LP, Hellhammer’s “Apocalyptic Raids”, or Sabbat’s “Desecration”, Ohio based Hammr’s second full length “Eternal Possession” is made for you!

Operated by J. Hammer presents a nostalgic form of paramount speed that resonates the essence of mid 80s black metal vehemence mixed with entrenched d-beat punk aura to give us churlish, vigorous, miscreant arrangements that are raw & relentless for its listeners. Following its predecessor LP “Unholy Destruction ”, still loyal to dominant extreme speed label Hell’s Headbangers Records, this second full length is a hell of a follow up for his catalog.

Bewitching cover art done by Nekromanzer, ink illustration with an inferno of fallen angels in an orbicular shape, epitomizing what’s in store for this release.

Strong opener “Forces of Sin” reveals an abominable madness that dwells with vitality that’s hard to compare in contemporary speed metal. His delivery is uncanny with dynamic skill, rekindling this youthful rebellious nature that commands your attention especially on “Seeping Chalice” & “Cascading Lustful Void” without going over the top or overstaying its welcome. Time frames of each tune are perfect, straightforward, & doesn’t get drawn out with it’s heavy distortion but only gets better with each track moving ahead.

Favored tune off this is “Ceremonial Spite”, encasing everything mentioned prior, but feel his vocals have more of a thundering fusillade in his pitch compared to others (with exception of closer “Torment Prevails Again”. The hardcore influence for percussion along with blueprints of pioneering black metal era harmonize wonderfully to create this gem! (Tori Belle)