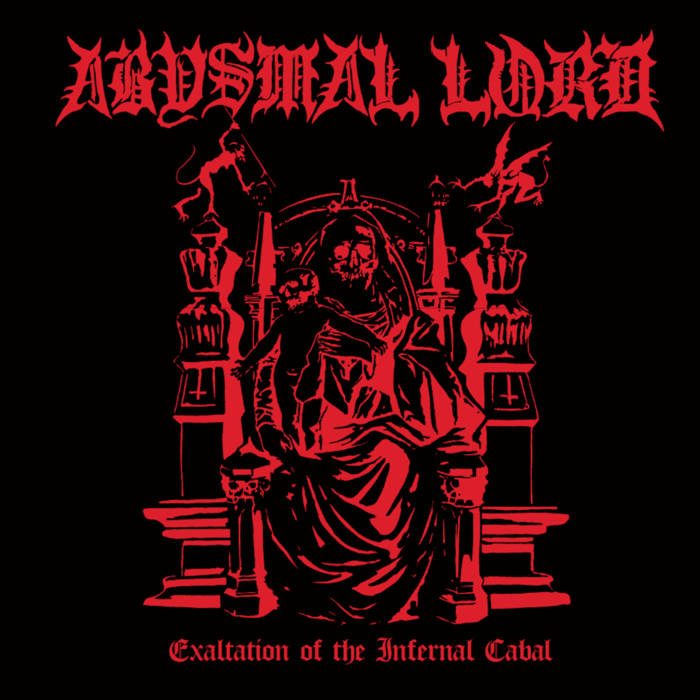 “Exaltation of the Infernal Cabal” is the second album of Bestial War Metal puked forth by the maniacs in Abysmal Lord. A destructive combination of bombastic Death and Black metal plays out across the 10 tracks of infernal hails and bestial rumble.

Surprisingly, the production is sonically clear and everything comes through the mix well, which is rare on most Bestial/War Metal recordings which usually are of lo-fi quality. This isn’t to say that there isn’t a gritty edge to the recordings here, they are still disgustingly bestial and sonically destroying. The riffs are simplistic, fast and furious; blending grind, death and black metal into a wall of crushing death that is only penetrated by the twisting howls and snarls of vocals. Speaking of the vocals, they quickly become the focal point of the album with their stand-out reverb and echo effects washing over the demented shrieks. Some riffs have a feeling of sameness to them later in the album but with this style of black metal, I don’t necessarily care so much about the creativity or technicality of the riffs so much as I care about the overall feeling and energy being conjured.

“Exaltation of the Infernal Cabal” definitely conjures a storms worth of vicious hate and destruction that stands shoulder to shoulder with genre legends like Proclamation and Archgoat. (Ted Gloom)