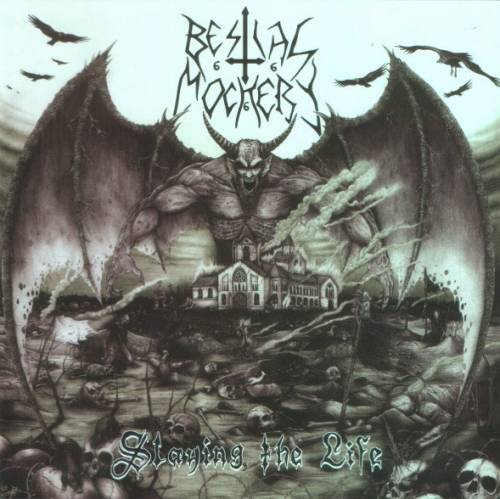 “Bestial Mockery have now went down into the grave! There will still be several releases out in the coming year since much is recorded. But now you must fuck off!”

This was the end of the statement a year ago when Bestial Mockery posted the confirmation of Devilpig’s death. Also gig flyers were made with remarks like “Last show ever!”. In the mean time the band came back, even with a resurrected Devilpig (?), left Osmose Productions and signed for the new sublabel of Season of Mist: Underground Activists. Also they released 2 splits and I’m listening to their new album and the band is available for interviews. Oh well…

Nothing changed musicwise, that’s for sure. Bestial Mockery still thrashes the socks out of your shoes and is as black as black coffee. Comparing “Slaying the Life” with their previous album “Gospel of the Insane” is quite easy: The filth continues. The band members must have sick minds and came out of the womb with chainsaws in their hands as damn, this album is vicious! Don’t expect polished, well-produced and high quality black metal, these Swedes blow your speakers with filthy thrashy black metal terror. You will shout “Antichrist” during “Antichrist of War” like it is a Nocturnal Rite. Master Motorsag and the other devilish spawns of Bestial Mockery will give you guidance during the 40 minutes of torture. It feels good by the way, thanks for asking. Their new label is about signing the most Necro, the most anti commercial and controversial metal bands, well…look no further.

I’m thrilled with the debut album of the label Underground Activists, it slayed the life out of me! (Ricardo)