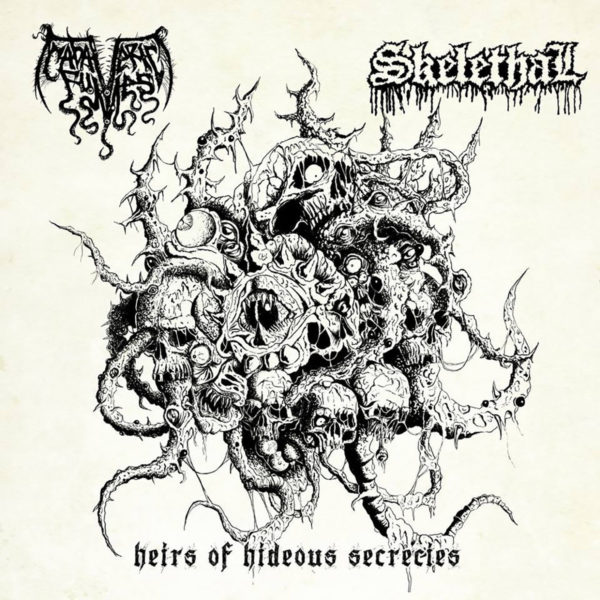 “Heirs of Hideous Secrecies” brings together one band I already liked, and another I never really had the opportunity to listen to, Skelethal and Cadaveric Fumes, respectively. This split is filled to the brim with two distinct takes on the old school death metal formula; Skelethal employ a buzzsaw hm-2 approach to their metal of death, whereas Cadaveric Fumes go down a more progressive route, with cosmic and slightly psychedelic touches. The cover art of the split is perfect for the two bands, it is both grotesque and reminiscent of Lovecraftian creatures.

Skelethal has been on my radar since their full-length “Of the Depths…” was released last year; their guitar driven and mid to fast pace brand of death metal hooked me instantly. On “Heirs…” they continue this style of assault with two songs, vicious thrashy guitars, drums to match, and deep growls permeate the landscape. Catchy and malicious, sinister and relentless, every riff is designed to maim, and every pound of the drums signals their charge; these guys are trying to break your neck with every song.

Cadaveric Fumes make up the back end of this split with two songs that have a nearly identical runtime to their counterpart. A much more open and progressive approach to death metal; otherworldly solos that sound like they were a recorded transmission from deep space, and unusual shifts and tempos. The vocals are a shouted vomitory growl, reminding me a bit of Horrendous, which is a natural fit for this particular style. I’ve always meant to listen to this band in the past, never really getting the chance, but after this release, it is something I need to rectify soon.

The pickier consumer might feel this split is pitched one way or the other based on their tastes, but for me this was an excellent blend, and a good showcase of the diversity within the sub-genre. I’ve been on board for Skelethal for a while now, so I wasn’t surprised in the least how much I enjoyed hearing two new tracks by them. Cadaveric Fumes really surprised me with their cosmic progressive death metal; the attention to detail was remarkable on everything especially the ethereal production. Highly recommended for fans of either band or the sub-genre.