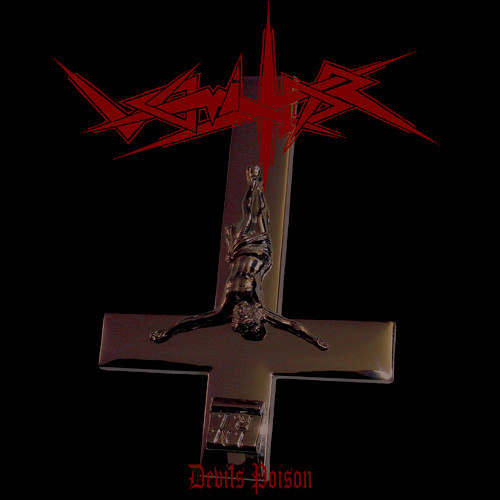 After the spiteful debut ‘Bleeding The Priest’ from 2002, the Australian alcoholic warriors of Satan Vomitor are back with their second offering ‘Devils Poison’. For those who don’t know, Vomitor’s line-up includes members from the mighty Gospel Of The Horns: Death Dealer on guitars/vocals and Hellkunt on drums. The cover artwork, depicting an inverted crucifix, leaves no doubts: this album is not proper for christian believers. Vomitor strike with eight tracks: raw, unpolished and dirty mix of oldschool thrash and black metal. Some og the tunes like ‘Neutron Hammer’ and ‘Midnight Madness’ are old and can be heard in previous releases of the band. Vomitor’s music is heavily influenced by the early recordings of Sodom, Kreator and Sarcophago and the whole furious thrash horde from the end of the 80’s. As you may expect, the sound production is totally underground. ‘Devils Poison’ sound more like a garage demo than an album made in the 21 century. But that was the intention of the band I guess. It’s fine by me although at places Death Dealer’s evil vocals are almost undistinguishable from the wall of noise created by the instruments. Anyway, in case you need to hear something raw and dirty, with a good dose of christian bashing, Vomitor are the band for you! (Zvetan)