Goathammer [CAN] – Ceremony of Morbid Destruction 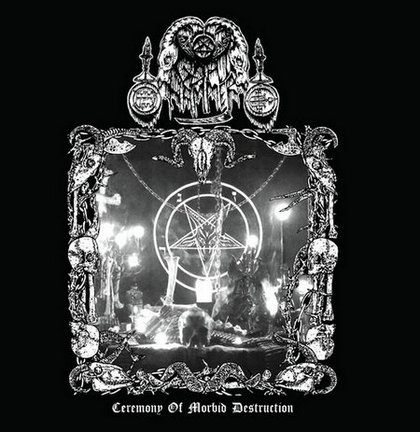 Without a doubt is the goat the most metal animal ever, which is most obvious in a fair share of band names in the undergound. While some of the creatures who are much respected and looked up to – most famous of them being the Baphomet – are portrayed with the goats head and other goat like features, also one of the most recognised symbols in the underground metal – the Pentagram – is drawn around the goats head, so the use of the word ‘goat’ is quite common in the underground. And there’s the word ‘hammer’, the obvious word to describe the primordial, beastly force of the music we’re about to hear. In this sense, the band name like Goathammer is as exciting as it is unimaginative, so not being previously familiar with this band, I was puzzled about what I would actually hear. It could be amazing or it could be a complete flop.

Goathammer are a Canadian band who plays a nasty combination of Black and Death metal who have issued their debut “Ceremony of Morbid Destruction” towards the end of the last year. Before that, they have introduced themselves to the world with two demos and a split with Druidus (where some of the members played before the project disbanded). It’s pretty obvious the members have already cut their teeth, especially making distinguishable hints on their own their influences, but not losing themselves in copying their idols.

The opener “Arcane Destruction Spells” sets the brutal atmosphere which is one of the leading forces on the album. Insane drumming combined with desolate riffing give away a certain old school feel to it. “Invoking the Sadistic Spirits” is the first highlight of the album, mixing in just enough melody and atmospherics to make the raw war metal attack sound truly frightening. And just when you think you know what’s coming next, the opening of “Into the Endless Night”brings clean guitars which are soon overridden with demonic vocals and destructive drumming. Throughout the album there’s enough versatility, from sheer brutality to moments of melancholy, atmospheric Black Metal and Thrash Metal, and progression in the songs, which is a quite a rare thing to hear in such an extreme concoction of Black and Death metal. Everything is spiced up with riffing ranging from buzzsaw to absolutely hypnotic, insanely crushing  drumming and vocals in the range of most known demons. (Black Mary)