Nunslaughter – Red Is The Color Of Ripping Death 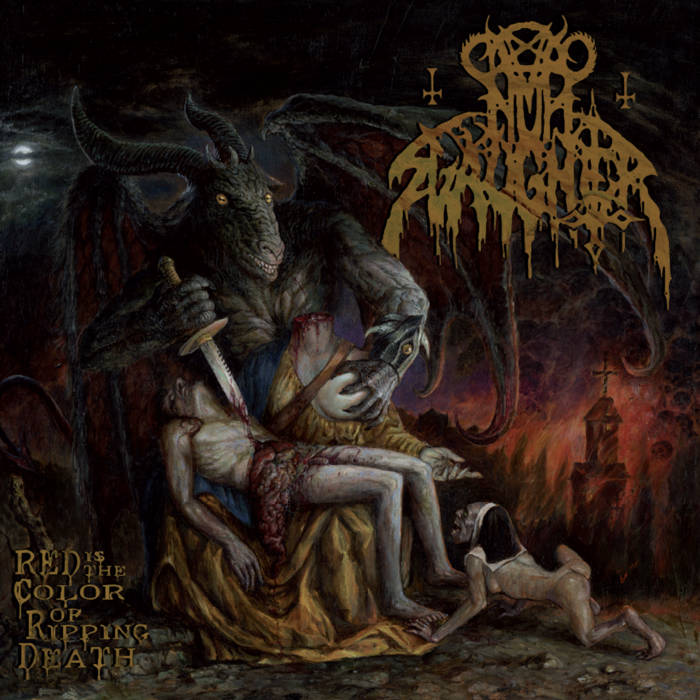 Only progression is their strengthened production quality, exceptional on their previous “Angelic Dread ”(2014) & “Goat”(2003). Another seven year hiatus from a full length, “Red Is The Color of Ripping Death” barely marks their fifth LP release. This album feels sentimental for the sole reason of being without original drummer Jim Sadist (RIP) & reconstructed lineup, presenting Wrath (BloodTusk, Cholera, & From The Hellmouth) on drums, Tormentor (Solipsist, Humanity Is Cancer, & Arecibo) on guitars, & Detonate on bass.

Salaciously desecrating cover by artist Guang Yang, also created quite a few 2021 album covers for bands: Urged, The Day of The Beast & Putridity.

Spawning fourteen miscreant songs, lengthened over thirty minutes of acrimonious, battering entertainment. Being a foreseeable Nunslaughter styled album, there’s no alteration within the writing & Don of The Dead’s bellowed barking is up to par. Few songs directly pertaining to antichrist himself with tracks like “Annihilate The Kingdom of God”, “The Devil Will Not Stray”, & “Beware of God”. Then there’s the majority of short timed tunes such as “Murmur”, “Broken & Alone”, & “Below The Cloven Hoof”. You get constantly forceful thrashy assaults throughout, with hardly any change up in the persistently upbeat tempo, with a couple exceptions including “Banished” & “Dead in Ten ”. Personal favorite is “Casket Lid Creaks”, a prime lengthy sample with a lingering tempo, protruding bass akin to a Geezer Butler riff.

Impressed with how this album turned out, & also check out that claymation video for “Below The Cloven Hoof.” It’ll be another seven years or twelve splits/eight EPs between the next LP release, so enjoy! (Tori Belle)