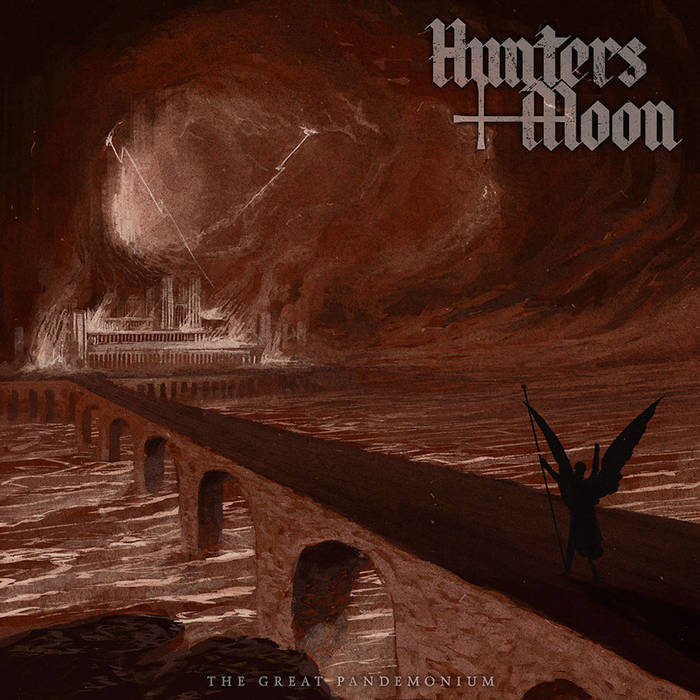 Being already struck by the warm and hellenic artwork of Australian Blackened Thrash band Hunter’s Moon, “The Great Pandemonium” gripped my ears from the first track with a single elegant riff, which builds into a  crescendo of rich and full Black metal with a Thrash intensity. The bands debut full length despite having been formed in 2006 with a demo and EP (‘Serpents Lust’) in 2009, the two-piece have certainly returned with a gargantuan sound of pure hellish fantasy born from Milton’s Paradise Lost itself. The 8 tracks on this record  range from drawn out mid-tempos, maniacal riffing, along with furious & maddening solos.

The balance of each section is walked with utmost care and craftsmanship, giving songs like ‘Pilgrim’s Exile’ highly unique dynamics and entrancing drama. In utterly Bathorian style, the sense of arcane magnificence across this melodramatic production places it effortlessly in the atmosphere of ancient Black Metal.

Production displayed across The Great Pandemonium, gives it an extremely physical presence that often escapes modern black metal. The peaks and harmonics of the guitar solos feel inspired by with true determination, and specifically even the drums sound as if they were recorded in the most putrid of dungeons to escape immense pain and suffering, which plays well to the overall concept of the album. Rounding out the ranges is a satisfying bass which feels as deep as the river Styx itself.

Although at times repetitive in each song structure, the homogeneity of this release is in no doubt a testament to rich conceptual foundation. I would only enjoy it more with a few different elements to break up the distinct wall of sound, an acoustic interlude, samples or a touch of the syphonic.

For those who enjoy Satyricon, Watain, Noctural Graves, and Craven Idol, one would find a welcome experience under the light of Hunter’s Moon. (Xenomorph)