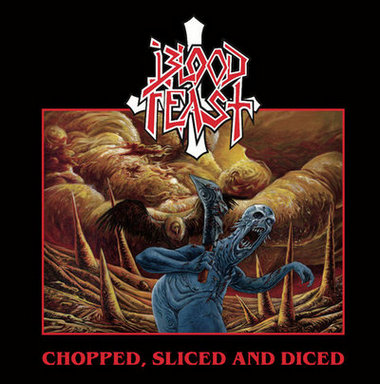 After releasing one of the top Thrash albums of 2017 with “The Future State of Wicked”, not to mention probably the best comeback album in Thrash Metal ever, Blood Feast come right back at you swinging with the EP “Chopped, Sliced and Diced” via Hells Headbangers.

Now, right off the start lets just put it out there, there is re-recorded material here from their first two albums “Kill for Pleasure” and “Chopping Block Blues”, however these tracks do not lack anything from the originals, actually they have a rejuvenated energy to them and are just as aggressive and mean as the original tracks. I personally usually hate when bands re-record old material (Exodus’ “Bonded By Blood” re-recording for example) but Blood Feast were able to do it right. The new track “Concubine” is a face melter with high energy fast riffs, machine gun drumming and blistering guitar solos. The vocals from Chris Natalini are spot on, aggressive, menacing and shrieking that will send chills up your spine. The EP also includes a bonus live track for “By The Slice” recorded in Osaka, Japan which captures the raw live energy of the band. Joel Grind (Toxic Holocaust) handled the mastering of the album and it sounds great. The aggressive attack of the guitars, pounding thunder of the drums and the maniacal shrieks and screams of the vocals are crisp and loud coming through the speakers.

“Chopped, Sliced and Diced” is a splendid follow up to their last album and hopefully a view of what more is too come from these Thrash legends. (Ted Gloom)