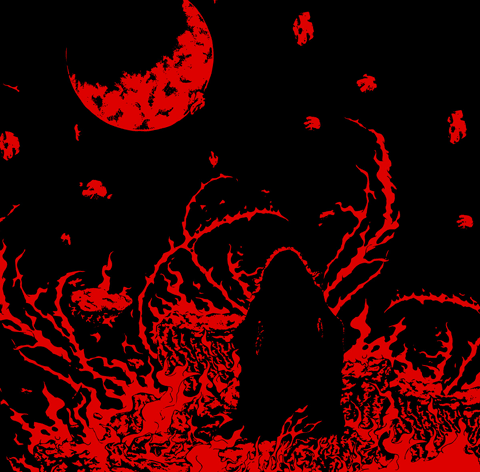 Although Outline is a fairly new act on the Speed Metal radar, it is fair to say it is a continuation of Demona, a thrashy Speed Metal band with Tanza Speed as the creator and originated back in 2007. After a couple of demos, EPs, splits and 2 full-lengths, working together with a bunch of bassists, drummers and guitarist, she decided to change the band name into Outline as she felt it was time to “move on” along with drummer J. Hammer, known for his work with Hammr. As duo The Speed and The Hammer, they recorded a demo and not long after that, the debut “Fire Whiplash” although some of the titles are from the Demona days (like “Metal is Me” and “The Assasin”).

Outline is all about 1980s Speed Metal with a wink towards Punk, so the riffs will be fired at you as a rattling canon. But there is also room for some mid-tempo traditional Heavy Metal like on “Lady Teaser” and “Away From You”. The song writing and the riffs aren’t outstanding but they are enjoyable still. But I do think their weakest link is the core of Outline as the vocals of The Speed aren’t always spot on sort of speak. With adding more traditional Metal parts the urge to do some clean-ish singing does grow within her, while my guts just think the opposite…take the fury up a notch. I rather would like her to sing in a more raspy and maybe even more fierce style than the well beheaved one on a track like “Lady Teaser” and “Away From You”. A more savage track like “Hell Squad” has the fitting vocals for it, if you ask me.

But I have to be honest, it didn’t crossed my mind to skip a song, so I can’t say it annoyed me…it’s more a feeling like “damn, a missed chance”. If you are still enjoying some old fashioned Speed Metal but without Blackened Thrash vocals or harsh vocals in general, check out a song or two. (Ricardo)