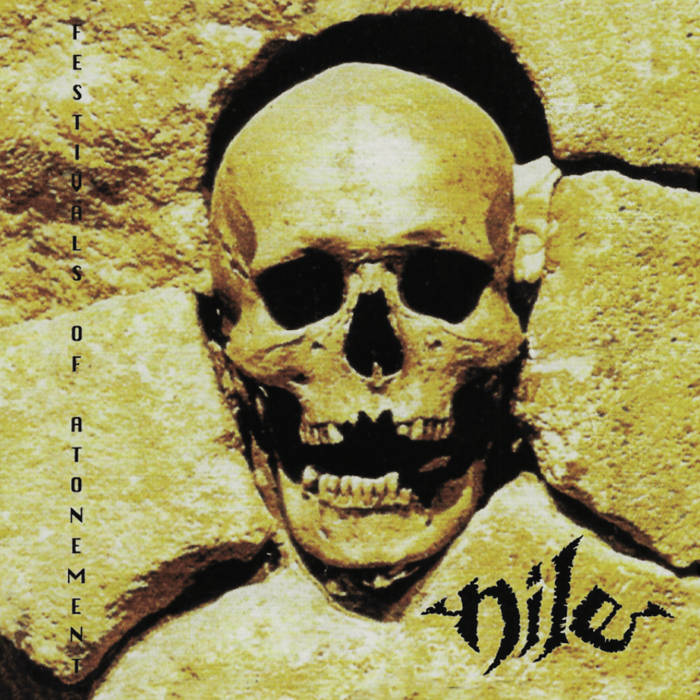 Although ‘Festivals Of Atonement’ was actually Nile’s second release, originally unleashed in 1995, and came before the ‘Ramses Bringer Of War’-demo from 1996, Hells Headbangers decided to re-release both in opposite order. It doesn’t make much sense to me, but it doesn’t take anything away from the musical historical value of both early recordings. Both were previously available on the 1999 Relapse Records released ‘In The Beginning’-compilation CD, which was issued a couple of time on multiple format over the past two decades. Now they have gotten proper stand-alone re-release for the first time since it originally appeared 27 years ago.

Both recordings shows the band in its early stages, experimenting with their musical ideas that combine Technical Death Metal with Egyptian themed melodies. While I think it is safe to say that the band got into their full potential on 2000’s ‘Black Seeds Of Vengeance’ (Relapse Records), in both integrating the Egyptian melodies and samples to their Death Metal and in mastering their instruments. On the recordings prior ‘Black Seeds Of Vengeance’ it is clearly audible that the band were basically still finding a balance between both of these trademark Nile ingredients and to get both to fluently flow into each other. On ‘Ramses Bringer Of War’ and especially on the bands’ debut, the 1998 ‘Amongst The Catacombs Of Nephren-Ka’ (1998, Relapse Records), you can really hear that Nile developed a clear goal and starting paving their musical path.

It is also good to understand that Nile went on this Death Metal journey in a time that Death Metal was as dead as possible. It was a time when the metal genre became more mainstream than ever. Bands like Faith No More were combing Metal with mainstream rock, funk and hip-hop influences and ignited a whole new movement and attracted many fans while extreme metal fans went looking for different extremes in Black Metal. As a result many Death Metal bands went to pursue other musical territories or simple threw in the towel. It is during these mid to late 90’s years that many Death Metal bands had some sort of a musical mid-life crisis with mediocre or down-right weak records. A period that would end up being a creative low-point to some, but fired up the creative minds of many others and it is in these years that the metal genre got a visionary boost.

So, just at the year that Death Metal was on decline, Nile was just getting started. In a genre that was starting to sound jaded and Nile was really starting something completely new. On ‘Festivals Of Atonement’, however, not everything had yet fallen into the right places. Their Death Metal did not reach the same level of ingenuity that they would later be revered for. With this first EP, however, they did sound miles away from a band like, say, Master or Obituary when it comes to technicality, but they clearly had some work to do. Again, it wasn’t until ‘Black Seeds Of Vengeance’ that the band really got their blend of Gorguts, Suffocation and Morbid Angel going the way intended. The same can be said about the use of samples and Egyptian melodies. On this EP they sound rather static and aren’t really embedded into the music, in fact, it all sounds a bit stiff and maybe even out of place at times. A good example is the odd melody halfway of ‘Wrought’. It is clear what they were aiming for, but it wasn’t as well executed yet. On the other hand, in a way it does fit the more primitive phase the band was still in.

All in all it is fair to say that the songs are much more basic and by far not reflect the band with its well balanced and even sophisticated sound they would later become. But it is also clear what made Nile so special, even in these early days. In that musical climate from which they sprung there weren’t many bands left anymore and Nile definitely brought something new. It only took them a couple of years to perfect their sound and to become Death Metal’s next revelation. Although you can argue that the band lost its magic somewhere in the second part of the 00’s, but I remember reading a live review of Nile’s appearance on the Dynamo Open Air festival in 1999 that talked about the crowd in one voice chanted: “Nile, Nile, Nile, Nile, Nile!”. I think that pretty much sums up what the first ten years of Nile was all about.