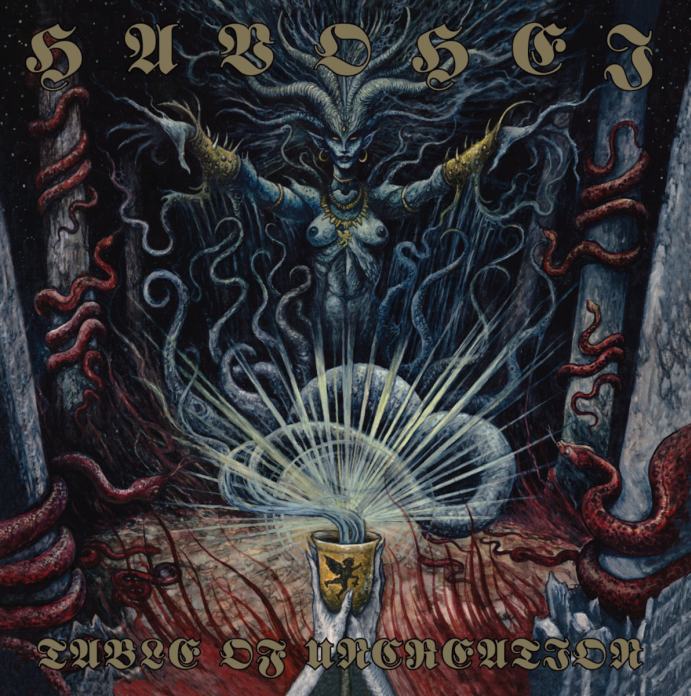 Paul Ledney completes a hat trick of brutal releases to finish off the year. As with new Profanatica, there is nothing new happening here…but a continuation of ear bleeding, christ shitting wall of sonic abuse that has always been the modus of Havohej. From the so deep and rumbling it sounds like a fuckin hurricane from under water bass, to the sparse but still creepy guitar riffs, to the vocals Ledney is known for…this release gives the two Profanatica releases this year a final and solid period at the end of their respective blasphemous statements. The Godfather of USBM never disappoints. (TravisN)

The new Profanatica was recently reviewed and mentioned that the band has always stayed faithful to their unique brand of blasphemous metal of death. Kuddos for that, we wouldn’t have it any other way. Havohej however, have evolved since the infamous “Dethrone The Son Of God” debut from 1993, which consisted of reworked and re-recorded Profanatica material. This album is still a milestone of raw and provoking mockery of the Christian faith and its icons and symbols.

Havohej do have evolved in time. Ritualistic musical patterns, harsh and unsettling repetitive droning soundscapes and what can be described as industrial influences were slowly introduced in every new release. From the opening track “God of all Constellation” the thing that immediately strikes the listener, is its colossal production. A thick wall of distorted sounds with slow, ritualistic drums and a deep coarse voice that vociferates unholy incantations sets the mood for a slow descent into the darkest regions of hell. ‘Holy Blood Grail” features enormously pounding drums and the typical heretical and demonic vocals of Paul Ledney. “Black Table” is again more ritualistic with cascading drums, droning abrasive sounds and deep growls. It grabs you by the throat and drags you ever further in this musical abyss. You can feel the massive production crushing you. Unholy muttered spells open “Seven Jinn” before exploding into full brutality accompanied by the sickening vocals of Ledney. It’s typical Havohej alright: fixated on reversing God’s creation – revelling in darkness & blasphemy – aiming for eternal darkness and chaos.

The nine tracks are as chapters of a black mass/grimoire of the ancient rites  that has opened the very portal to Hell …“Table of Uncreation” is a very unsettling and disturbing soundtrack for those who want to take a glimpse of Hell, so to speak. The more you listen to it, the more details you discover.

This album is by far the best Havohej release to date. It’s everything but boring as it offers plenty of variation and blasted through decent speakers, all crucifixes will spontaneously tumble down from the walls. … Your neighbours will also never talk to you again for as long as you live.

Those familiar with Havohej don’t have to hesitate in buying this new opus. Others are advised proceed with caution. (LV)