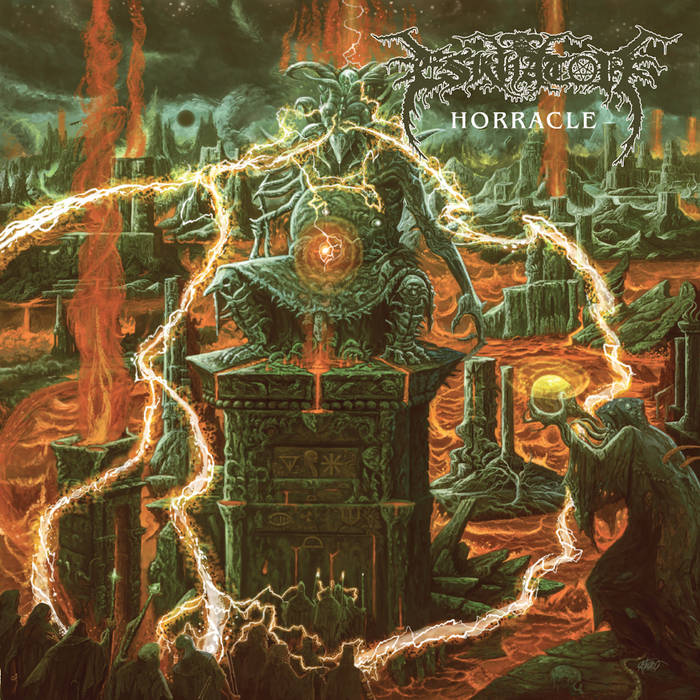 ‘Horracle’, the title is already more than promising from a band that in my opinion belongs to the most brutal and violent bands on the planet! Eskhaton from Australia are back with 5 new tracks that will haunt you forever!

Extreme Metal fans should be aware oft he destructive force down under has since more than 3 decades and Eskhaton keep the tradition of chaotic, unmerciful, total death! Since 12 years torturing lunatics with highspeed razorblade throwers from another dimension, so dark and fierce you think you entered a secret level in DOOM!

‘Omegalitheos’, their 3rd full released 4 years ago grabbed me by storm and made it one oft he most listened records during the last 4 years and a personal fave ever. Unrelentless, piranha swarm like underworldy music, I wasn’t prepared at all. Fast drumming, alien structures and riffing, vocals sooo evil and mindcorrupting. I’m drifting away, back tot he actual Horracle, fitting title and great artwork once again, this time presented by Juanjo Castellano Rosado who illustrates a colorful, yet evil inflicting scenario of the title. The production this time is less bassladen in my opinion, which gives more space to the drums and guitars (everything is more audible, you can hear the details better compared to ist predecessor). The chaos is still the dominant element, although it feels more under control compared the the last record (‘Vortexecution’ for example has a more symplistic structure and gives more space to breath).

‘Omnicidol’ has everything this band stands for and gives even praise tot he ancient ones from down under (like Corpse Molestation/Bestial Warlust elements). ‘Khaossuary’, is, like the title suggests, a bundle of tornados and the pure nightmare for each and every drummer (those blastsections, damn it). ‘Vortexecution’, as mentioned before, has more control but is also catchy compared to other material (the solo is nuts). The song is a rain of bullets, drums taking the lead, fast and powerful, accompanied by morbid riffing and sometimes Revenge like bestial grunts (something new in the band’s DNA). Now the most alien track of the record, ‘Aftermathemagician’, a pitch black heavy weight which starts slow, deep and heavy, a Lovecraftian nightmare that slowly starts to take shape or maybe not, before the last horror awaits with ‘Nethereal’, the closing track of ‘Horracle’. It kicks in with 3 tones and then the killing begins. The bass shows its importance here to keep things flowing when the guitarsgods take possession of the players. You can feel an infernal presence on this track, from the nether so to speak, whith nice twists and turns, variations to keep the listener interested. Sometimes I hear ‘Gateways’-like atmospheres and chords (Morbid Angel are still relevant), yet its well incorporated in the own DNA. The second half is pure chaosophy with one of my favourite parts on the record (6 :00 and my mind explodes). There is also a lot of single string tremolo picking on this track, with much more ‘repetive’ riffing than usual, If we can name it like that.

There is so much going on once again you still have to listen to it multiple times to figure out every detail. This time though, things are a bit easier to grasp, be it the production and the songwriting.

Nevertheless, it remains unpredictable, sonic nightmare from the netherworld. You think Death Metal can’t sound brutal and evil anymore ? Well, listen to this, it might change your mind. EP of the year! Now back to tour Europe guys!