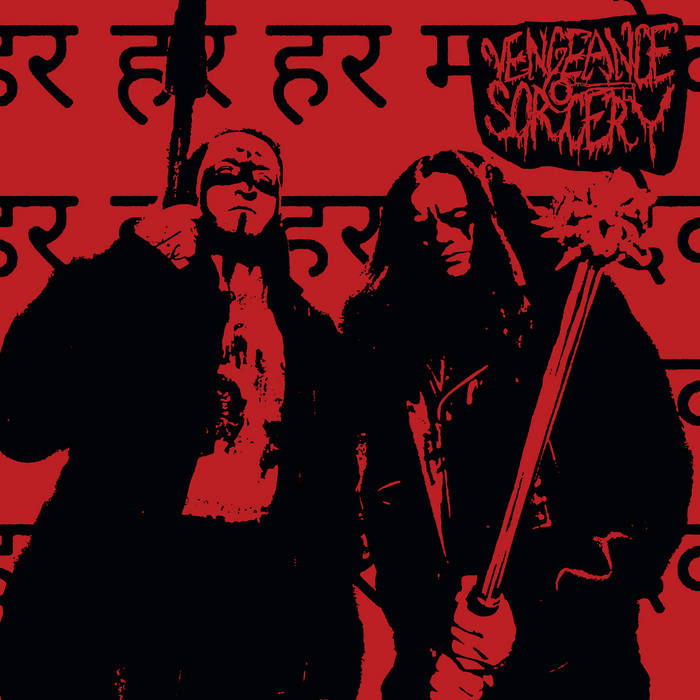 Recently I dived into the four demo tapes of the illustrious duo of Vengeance Sorcery, going through many minutes of their quirky and captivating blend of Black Metal and Doom Metal, made me curious to the band’s full-length album. That comes to you in the form of ‘Betrothing Spirits At Nightfall’, released by Nuclear War Now! Productions, who also reissued all their demo tapes prior the release of this debut album.

Though the band uses a pretty one-dimensional concept with their bass-heavy rumblings and basic, stripped down sort of drumming, they do not seem to have a hard time cranking out decent tracks. Compared to most of their demo tracks, of which the last ones are about two years old now, the recordings on ‘Betrothing Spirits At Nightfall’ sound a little louder and heavier, giving the tracks an even more powerful punch. Other than that, not much has changed, really. The equally as powerful song writing shows that sometimes you can pull it off just with very little resources. Vengeance Sorcery is the living proof that you don’t need any keyboards, a huge Gene Hoglan-kind of drumkit or pro-tools production to have a kick-ass sound – what, you don’t even need a guitar!

With their low-end Barathrum/Reverend Bizarre/Beherit-blend Vengeance Sorcery contribute to a musical movement that seems to draw much more from Noise Rock, early Punk and sleazy Garage Rock than from Mayhem or Emperor. That love for a minimalist approach, and making music on your own more often than not, seems to be highly contagious because they are popping up like mushrooms.