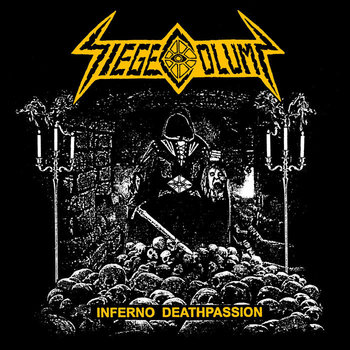 I’m not going to lie, from the name I was expecting this to be grindcore. But what my ears were greeted by was far from grind! Siege Column play an incredibly raw and lo-fi form of death metal that is absolutely barbaric and face peeling. It has War Metal leanings but to my ears it is very raw Blackened Death Metal with a bit of Thrash thrown in. This isn’t an album that wastes any time, it is go for the throat from beginning to end. The songs move from one face peeling riff to the next, drums flailing and vocals snarling and growling like a rabid dog. This isn’t a band that utilizes any studio gimmicks or short cuts. This is the sound of a band setting up, playing live and leaving all of the warts left in tact. It is encrusted in a layer of filth that could make you believe that this was recorded in 1985. Some bands claim to be raw and lo-fi but this is the real deal. Think vintage Sadistik Exekution mixed with Blasphemy but then ran through a cheese grater and you have Seige Column. This is raw, unapologetic and above all else, fucking awesome! (MikeH)