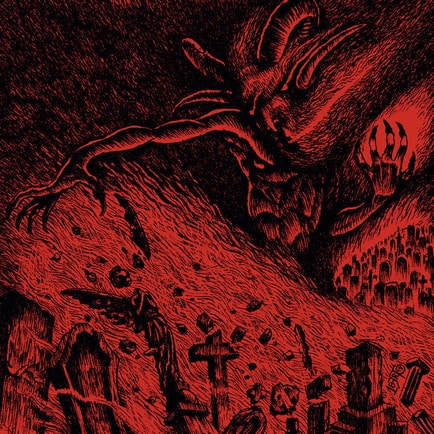 Released by Nuclear War Now! Productions on cassette and 7 inch vinyl, this split between Evil and Siege Column packs a hard punch of underground metal.

Evil from Tokyo, Japan have three tracks on the A side of the split. They play a dirty/raw style of blackened Thrash Metal with glimpses of punk shining throughout. Akin to early demo era Sodom and Destruction, they definitely live up to their band name, as this is some evil fucking Thrash metal. Vocals are a mix between short barks and some heavy metal style shrieks.

Siege Column are a two-piece from New Jersey, USA and they come bulldozing through on Side B with two tracks. They play old school Death Metal with some grind-y parts thrown in the mix. They fall somewhere between Bolt Thrower and Repulsion with a bit of Septic Death weirdness sprinkled on top. A lot of lead guitar parts are splattered through-out the tracks, which gives a frantic impression to the songs. Tempos change quite frantically as well from mid-tempo to blasting to punk-ish Thrash. Vocals are fucking beast like guttural roars.

The split clocks in at just over 13 minutes, so if you have a short attention span, this one is for you. You can also replay it over and over until it sticks to your rotten brain. (Ted Gloom)