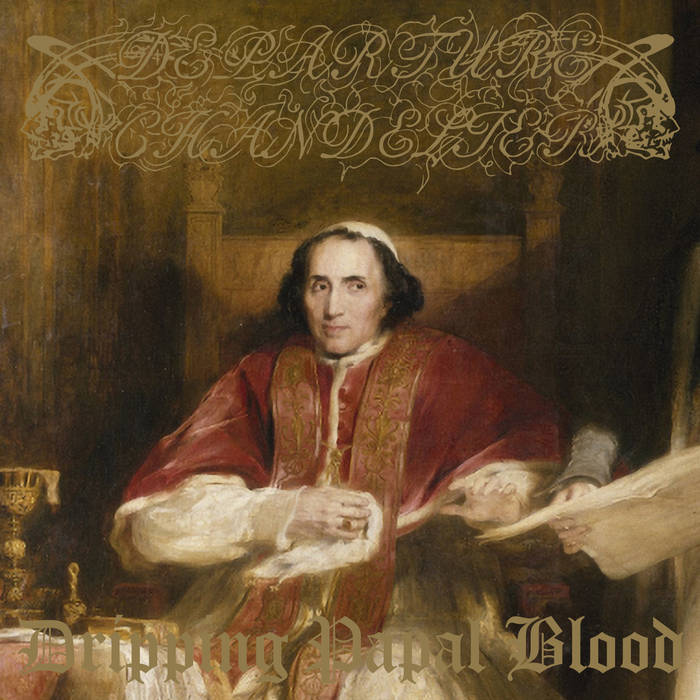 Originally an independently released demo, ‘Dripping Papal Blood’ got a proper CD release earlier this year through USA’s top purveyors of all things great Nuclear War Now! Productions and Japanese Obliteration Records, but it finally also got a much deserved vinyl treatment as it also appears on a nice 10” vinyl EP. ‘Dripping Papal Blood’ is the follow-up EP to the bands’ revered ‘Antichrist Rise To Power’ debut-album. The album caused quite a stir in the underground Black Metal scene and lived up to the expectations that the previously released demo tape and split 7” EP with Blood Tyrant left.

With such a back catalogue it might be hard to fulfil all those expectations, but with this demo the band just stayed true to their own musical identity and kept their course straight. With their fabulous debut album, the band firmly set the tone and made clear what they were aiming for, but going back, even from their very first recordings the band settled with a unique sound. That sound embodies their visionary work, which only deepens with every additional release. The band was formed by three musicians who are currently active in Ash Pool and Akitsa, two highly acclaimed acts in the Canadian Black Metal scene. Knowing this might help you fit in the pieces a little, as the signature Departure Chandelier sound is deeply rooted in lo-fi Black Metal with a strong Punk-vibe but it gets masterfully blended with atmospheric yet very raw Black Metal. The use of keyboards is broadening and strengthening the bands’ fundament and builds a mesmerizing atmosphere. Something that the rough and raw character of the guitars strongly contrast with, but also sets the total mood of the music, shaping a melancholic, yet virulent feel. These demo recordings have the same sharp guitar tone, but tend to be a little less piercing, resulting in a slightly more accessible sound but not at the expense of their own uniqueness.

This demo (or EP) clocks well under fifteen minutes. Since it also comes with an intro and some sort of outro this might be a little short, but again it shows the bands’ absolute greatness. To me these recordings are the best Departure Chandelier presented so far, but I can’t resist stating that, regardless of how great these tracks are, a price of well over €20 for a 10” EP is really steep.