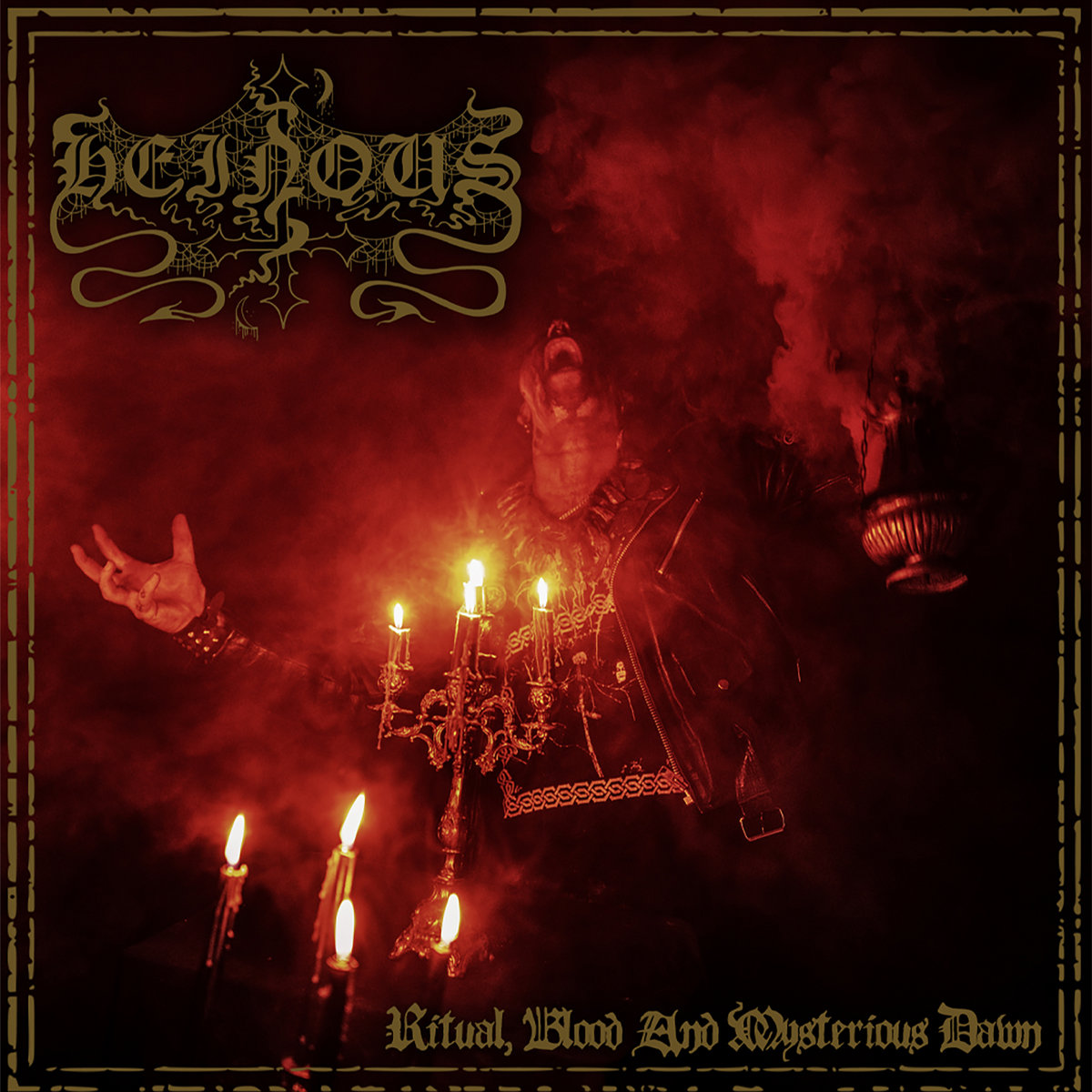 My first introduction to Heinous came with their ‘Demo I’, initially released through Medieval Prophecy Records (cassette) and later by New Era Productions (CD and 10” mLP). The recording featured ferocious occult Black Metal with bellowing reverb-drenched vocals and was a showcase of the strength of the current Belgian Black Metal scene. The band backed that promise up on the subsequent ‘Lucifer Vult’ 7” EP, once again brought by those same labels. On that EP, VJS of amongst others Adaestuo, Sargeist and Nightbringer provided keyboards and since has joined the band permanently. In the following years the now six-piece band continued playing live and commenced work on new material. This has culminated in their 2022 debut album ‘Ritual, Blood and Mysterious Dawn’ a joint release between New Era Productions and Nuclear War Now! Productions.

On the second track of the ‘Lucifer Vult’ EP, ‘Maudits’, we already found the band expanding their sound a little bit by changing up the wild passages with more atmospheric and melodic elements. And on ‘Ritual, Blood and Mysterious Dawn’ this is further continued. While most songs contain bouts of fierce occult Black Metal in the Norwegian style, keyboards play a more prominent role, at times recalling the sound of the earliest days of Emperor and Dimmu Borgir. Furthermore, we find fairly frequent changeups to more melodic section that sound a lot like Sargeist, something that is very obvious in for instance ‘Seven Sins Of The Light’.

By blending these different influences, the band manages to keep the compositions interesting, and some of the album highlights include the title track and in particular the ferocious ‘Last Days Of The Apostates’. I would say the songwriting on the album is excellent and they perfectly manage to blend different Black Metal styles in their newfound direction of sound. I’m a little less enthusiastic on how the mix affects that. The guitar sound is a touch on the quiet side, especially compared to the vocals. While I love the intensity of the vocals, they are overpowering the other instruments at times, distracting from the layered sound the band undoubtedly intended. Even though the keyboards are a little bit better balanced as a whole, on ‘Eternal Curse Of The Knights’ I find myself wishing there were just slightly more to the back… or in general, that the guitars were just a tad more dominant in the mix.

I’m a bit torn when it comes to the first Heinous album. I liked the intense untamed nature of the demo. While the essence is still there, that feeling is a bit lost on their debut. I think that’s in part due to the expanded musical direction. I have nothing against that, and the music on ‘Ritual, Blood and Mysterious Dawn ‘ is well-written and played and the compositions are strong. It’s just a bit brought down by the overall sound, leaving me a little bit less impressed that I hoped I would be. (VincentP)