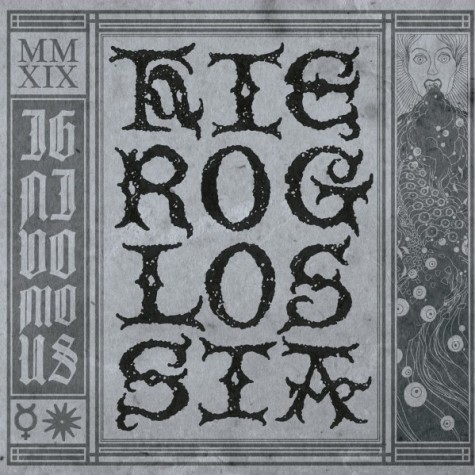 I remember all the way back in the year 2008, when I first heard this band on their debut EP “Eroded Void of Salvation” and instantly fell in love with their cavernous personal take on the Incantation worship area of Death Metal. I subsequently bought and reviewed their two full lengths that followed, the last being the tremendous “Contragenesis” that came out seven long years ago in 2012 and then there was nothing, in terms of releases. That is until now, now, in 2019, we have the first new release from Ignivomous in those seven years in the form of their third full length, “Hieroglossia.”

Honestly, it had been so long since I have heard of Ignivomous doing anything that I had thought they might have packed things up and moved onto further musical ventures. But alas, I saw a fateful post on Facebook that brought “Hieroglossia” to my attention and my ears, also it brought about this review I am writing and you are, hopefully, reading. And, let me tell you, it was a great thing to hear these guys again for I honestly just love their work. It takes time and multiple listens to truly digest what you are presented with but the enjoyability comes from the moment that you hit play.

An enjoyability that comes thanks in part to Ignivomous’ grasp on just writing really good songs that have a certain flow or swing to them while still maintaining the layers of intricate subtleties that make them truly ingenious. As stated in the first paragraph, this is Incantation style Death Metal, to try and describe it any other way would actually be doing the band a disservice. For it may not be an original sound but they have made it their own and damn near perfected it here on “Hieroglossia.” (Ben Schultz)