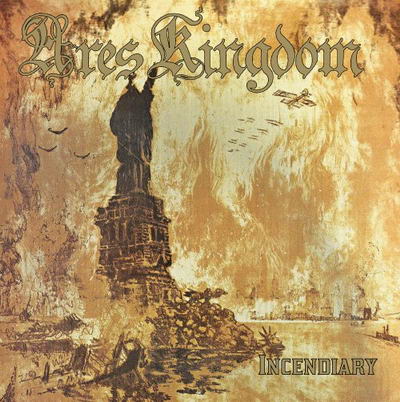 If you’ve never heard of these Ares Kingdom blokes before there’s nothing to fear. Neither has this writer until “Incendiary” burned his misgivings to a charred crisp. Apparently the middle aged quartet have been lurking armed and dangerous in the U.S. underground up to their debut some years back. They’ve now followed that first strike with an equally uncompromising slab of stone age thrash metal that’s all gritty riffs and raw production whose cover depicts Ms. Liberty and the Big Apple wrapped in cleansing flames. Holy fuck.

As mentioned, “Incendiary” burns your misgivings to cinders on its opening salvo “Incendiary” that knocks the door down, grabs you by the collar, and punches you right in the family jewels. While this isn’t exactly what the lyrics are about, if the song were rendered into movements, why, it would do as described, punching you in the balls, etc. etc. etc. “Descent of Man” eases the furious tempos a bit (just a bit) to allow for a little recovery following Alex Blume and co.’s introductory credits.

Looking at Ares Kingdom’s few promotional band pictures (actually there’s only one floating around the darker corners of the internet) reveals a quartet beset by considerable years whose youth flowered around the time thrash came about some 25 odd years ago. Such past history is apparent throughout this sophomore outing, especially the churning “Beasts That Perish” and the album’s apocalyptic finisher “Abandon In Place”. Those looking for easy comparisons will feel right at home if their tastes run the gamut of Sodom, Blood Tsunami, Deadknight, Warbringer, Venom, early Kreator, At War, and Legion of the Damned. Basically stripped down old school thrash devoid of frills whose savage nature almost careens headlong into the death metal realm at its fiercest moments.

Contrasting the band’s relentless riff-driven bombardment are two surprising exercises of musical finesse, these being the instrumental segues “The Destruction of Sennacherib” and “Consigned To the Ages”. Between these lay a generous amount of carnage and uncivilized warfare as the band indulge their misanthropy on such burning tunes as “Ashen Glory”, “Gathering the Eagles” and why, “Incendiary”. That said, it’s high time you saluted these troopers and braced yourself for the inevitable firestorm. That is, if you choose to patronize Ares Kingdom. (MiguelM)