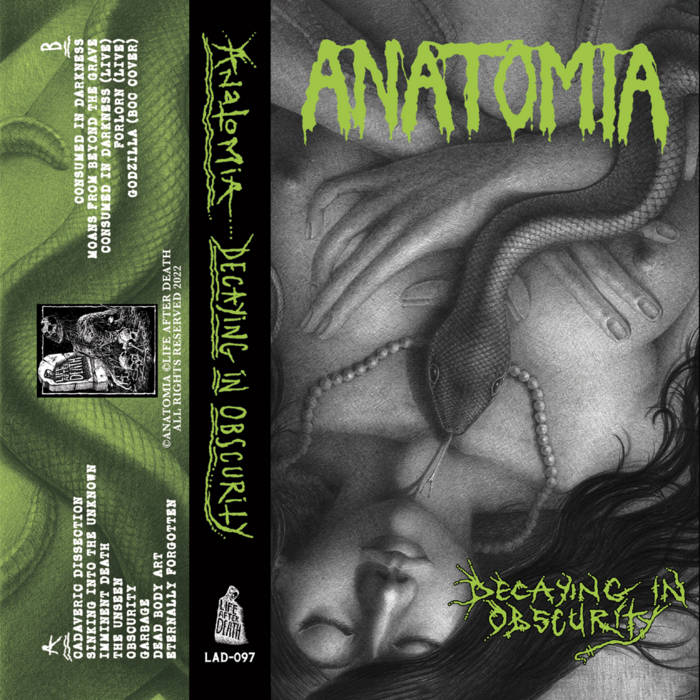 US Death Metal label Life After Death have re-released There are on cassette the 2012 second album ‘Decaying in Obscurity’ by Japanese Death/Doom legends Anatomia. Without much preamble opening track ‘Cadaveric Dissection’ hits straight into the fast chugging riffs and frenetic drumming before equally as quickly slowing the pace right down with a Reverend Bizarre style level of groove behind the guitars. And so the pattern repeats, quickly creating an atmosphere of gore soaked horror through thick, muddy bass lines and putrid growled vocals, and the depravity only intensifies throughout ‘Sinking into the Unknown’ with distorted down tuned guitar leads throughout as well as crushingly heavy slower passages that feel like being mired in toxic quicksand. There are of course plenty of obligatory horror movie audio clips scattered throughout the album but not to Mortician levels by any stretch of the imagination, so the focus lays solely on the rotten tones and misanthropic moods, as well as a touch of horror synth during ‘The Unseen’ which a marvellous touch! For the most part ‘Decaying in Obscurity’ slithers and crawls along at a sluggish pace, drenched in groove and fuzz, yet at other times such as during ‘Garbage’, Anatomia are equally well versed in turning it up a few notches and bashing out repugnant riffs and chaotic drum tones. Throw in a couple of monolithically heavy live tracks, in this case ‘Consumed in Darkness’ and ‘Forlorn’, which both sound like the bass lines alone would have cracked ribs in the audience, plus a gnarly, slowed down cover version of Blue Oyster Cult’s ‘Godzilla’ and you have one hell of a re-release on your hands! (Luke Hayhurst)