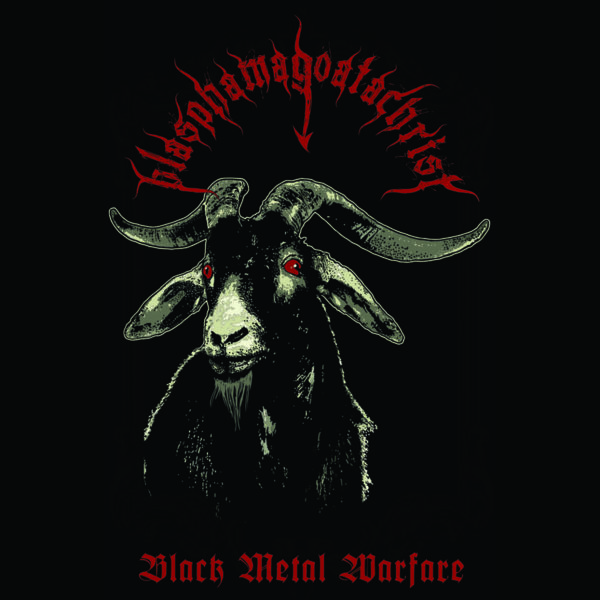 Saving my personal favourite of the four for last for Month of the Goat, we’ve arrived at Blasphamagoatachrist and their release “Black Metal Warfare”. Comprised of members of Goat Penis (Sabbaoth and Virrugus Apocalli), Antichrist (Incenerator Of Lacerated Angels And Coffin Destruction) and Blasphemy (Nocturnal Grave Desecrator And Black Winds) this band has many years experience of destroying their listeners.

This is exactly how you expect it to be. A triumph of Black Metal insanity starting out with a myriad of samples including an air raid siren foreshadowing the onslaught queued by a marching drum beat. If this doesn’t get you in the mood for war, you can’t handle it. The music hits you in the face. It’s blazing fast and with very prominent cymbals and a crunchy bass tone. The drummer is inhuman and the breakneck speed makes the drums probably my favorite thing about this album.

The guitar solos totally caught me off guard. The deviation from the churning riffs and the clattering of the drums really sticks out. The shrieking tone is perfect and the entire thing is well executed. These guys go further than just the aggressive aesthetic with actual musicianship that goes against the grain of the typical harsh yelling and helter skelter of unrefined drum patterns commonly found with the more esoteric releases.

All the intro samples on the tracks set the mood perfectly before you’re face fucked by War Metal perfection. Overall lower production quality is the standard for the genre, but Blasphagoatachrist does it well, as a compliment to suit the style as opposed to using a toaster to cover up shitty playing. The tinny drilling and the pounding of all the instruments burns mental images of death into your head.

For fans of the bands the members are more commonly known for, this is something completely new, yet definitely familiar. As far as Black/Death/War metal goes, this album fucks.