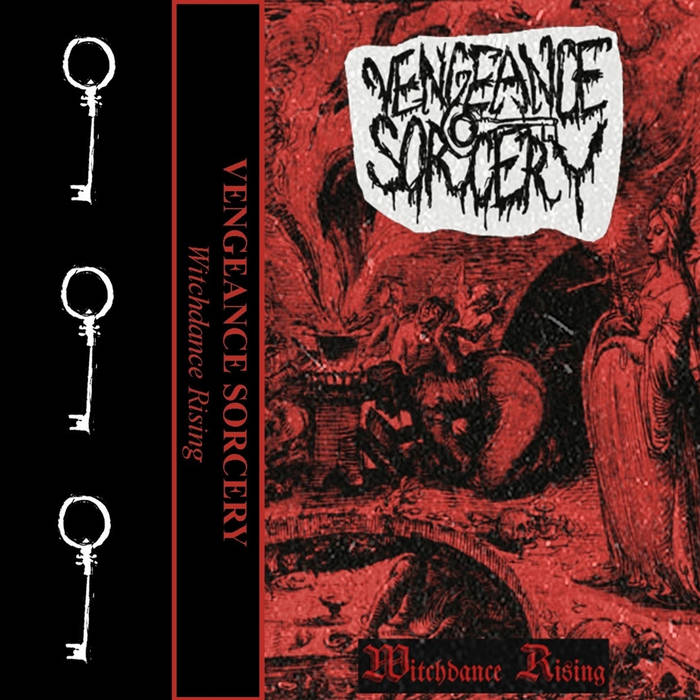 At the very beginning of this year Nuclear War Now! Productions reissued the first demo of American duo Vengeance Sorcery, that originally saw the dark of night in 2019 through Funeral Maelstrom. Though they have released four demo tapes between 2019 and 2020 and all four demos were compiled and released on CD in the summer of 2020 by Fallen Temple, I wouldn’t be surprised if the band remained largely unnoticed. At least they never popped up on my radar. Until earlier this year that Nuclear War Now! Productions announced the release of the band’s debut album. The reissue of this first demo can be seen as some sort of an appetizer.

The demo closes with a Barathrum-cover, and although it is the closing track, it says so much about its musical content. The five other tracks, the Vengeance Sorcery originals, are basically in a true Finnish tradition, blending all sorts of Finnish darkness. The bass-heavy rumblings have obvious resemblances with the aforementioned Barathrum and also the heavy Doom Metal stalwarts of Reverend Bizarre, things are topped off with the slow and dragging enchanting nature of Beherit’s ‘Drawing Down The Moon’. Both Barathrum and Reverend Bizarre have very apparent similarities by stripped down concrete-like Punk, which also shines through the music of Vengeance Sorcery. It is that noisy punch that evokes the right underground atmosphere in which both Black Metal, Doom Metal as well as Punk thrives best.

It comes as no surprise that of all the labels in the world Nuclear War Now! Productions unearths this unpolished gem of underground beauty. It might not be anyone’s cup of tar, but it might appeal to fans of anything dark, slow, rumbling and gritty, regardless of genre preference. (FelixS)

US Occult/Satanic Black Metal duo Vengeance Sorcery have had their debut demo release, ‘Witchdance Rising’, re-released on cassette this year by underground stalwart label Nuclear War Now! Productions. As you might expect this re-release is for fans of super lo-fi production, simple sounding Black Metal and croaky vocals. Now, as a rule lo-fi production does little for me but I’m not totally averse to it if the band in question has the musical talent and song writing ability to pull it off. save for the bass heavy overtones which I do enjoy, Vengeance Sorcery are not one of those bands, and the ‘Witchdance Rising’ demo sounds exactly like what it is, two guys in their basement playing around with their instruments. The style is so simplistic it’s child like. There are literally thousands of demo releases out there just like this and it beggars belief that labels still keep finding these things and putting them out. As I’ve stated, simplified lo-fi Black Metal definitely can be a good listen when done well, but this is garbage! (Marksson)