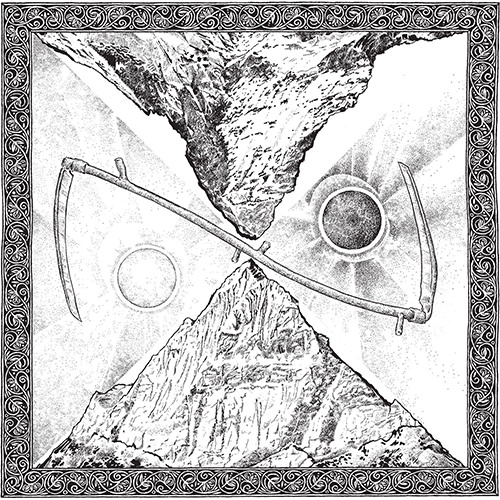 I really like splits when all the presented artists do well, sometimes even more than some full length, because it`s where sometimes new ways of art are going to be created. Ysengrin with their Black/Death/Doom mix are very special in their sound mix, having some kind of ritualistic drone feeling in their sound, alternating with 80s Black/Thrash riffing and a very obscure experimental edge which will turn your psych into mushrooms induced spiral trips…that`s how I imagine it. The second track is a very ambient piece with some litanies being spoken, only to be interrupted at the end by classical baroque guitarplaying before the speech ends. A good addition to the record.

Stargazer to their hand deliver their crazy mixture of Heavy/Black/Death/Thrash with a progressive carpet, all presented in a very natural, organic production, which works in favour of the compositions and atmosphere in general. The musicianship is once again top, the basslines are of an extra class. The guitars deliver tasty leads and crushing riffs. The vocals are versatile again, show a big range when necessary and the drums are skilfully mastered, using a lot of fills and cymbal accents. Stargazer also make use of dynamics the way you won`t hear it by standard extreme metal bands. The clean guitars create some really cloudy and spacy landscapes, speaking from distant places. The band then strikes back with a midtempo Black/Thrashing part which only makes you raise your fist and bang your head…nice old school vibes here. Strong release by both bands once again and recommended If you are open minded and seek new ways of darkness. (DPF)