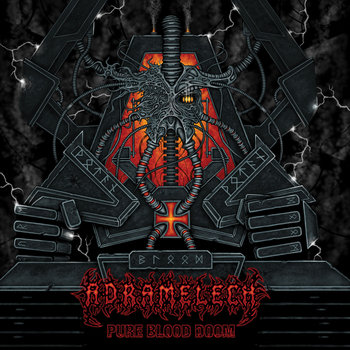 If you are familiar with the Finnish Death Metal scene, you will know the existence of Demigod, Amorphis, Demilich, Convulse and old Sentenced to name a few of the leading names who have released some decent and great albums. One of the more unknown graverobbers of the 1990s are Adramelech, who have released 2 fine EPs as well as a more than decent debut album with “Psychostasia”, released by the infamous Spanish label Repulse Records. That one is considered as an Technical Old School Death Metal gem which they haven’t matched anymore with the releases afterwards.

This doesn’t mean “Pure Blood Doom” is pure shit…hell no! This is just more groovy, like a track as “Abomination 459” which has similarities of a mid-tempo Morbid Angel-esque song. If you are familiar with the 1999 “Pure Blood Doom” album release and you will hear this re-release, you will notice the different artwork as well as the remastered sound, which is more to the point and less polished yet more clear than the old sound which fits the presented OSDM more. It seems an original copy of this album costs a small fortune, therefore this re-release is very welcome for those who a decent slab of Finnish Old School Death Metal with a dark, groovy and technical twist. (Ricardo)