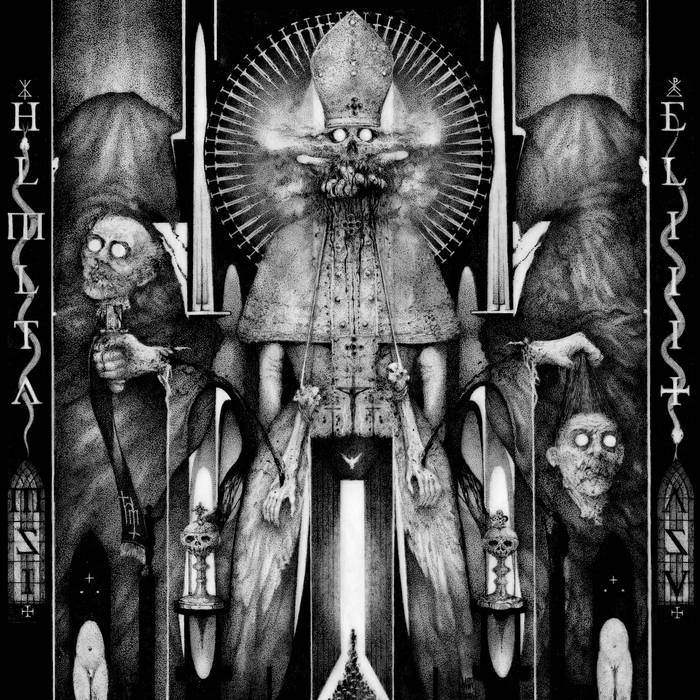 No less than ten years have passed since Hell Militia’s last album, the rather underappreciated and often misunderstood ‘Jacob’s Ladder’ from 2012. As anyone can imagine, a lot can change in ten years. So too in the camp of French Hell Militia, in those intervening years vocalist Meyhna’ch (Meyhnach, ex-Mütiilation) has left the band and has been replaced by Dutchman RSDX (Rogier Droog in real life, known from bands like Weltbrand, Funeral Winds, Bethlehem and Valkyrja). But some things also just stay the same, Hell Militia’s latest album, ‘Hollow Void’, does differ from its predecessor on a detail level, but is by and large a natural continuation. The direction of somewhat unorthodox-sounding Black Metal the band has taken on previous albums is further expanded and perfected on ‘Hollow Void’.

French Black Metal as a whole can also easily be labelled unorthodox, the country not only offers a diverse spectrum of Black Metal styles, but also has a rich history in the genre with a clearly identifiable style of its own. Many French bands have contributed in their own respects to the development of the French Black Metal identity. Be it Antaeus, Arkhon Infaustus, Temple Of Baal or the aforementioned Mütiilation, they not only have made their individual contributions to the French scene, but also very specifically to the sound of Hell Militia.

The band started twenty years ago as a collaboration between members of exactly those bands, the result was a very vicious Black Metal band with a slight Death Metal edge to the guitars. Hell Militia’s earliest recordings were still mainly characterised by a more standard sound, without too many recognisable or startling elements. ‘Jacob’s Ladder’ was the turning point in that respect, on that album many pieces of the puzzle started to fall into place and the band had found their hole in the Black Metal scene. The balance between Norwegian-sounding Black Metal combined with the cold, almost industrial sound of the illustrious Les Légions Noires cortege (Mütiilation, Vlad Tepes, Belkètre, among others).

Despite the decade-long pause, ‘Hollow Void’ feels like a logical sequel to ‘Jacob’s Ladder’. The slightly atonal and dissonant riffs swirl as ever, the cold and somewhat industrial feel of the guitars and drums still yield comparisons with bands like Deathspell Omega and Ofermod. When to look for differences between this latest album and its predecessor, it can be found in that particular corner. The somewhat more complicated riffs and song structures that characterised the band before have been further developed, refined and perfected, yet it came at the expense of that Death Metal edge, which by now pretty much disappeared. It is only sporadically that this Death Metal heritage is still audible, for instance in the more lingering riffs in ‘Veneration’. It does, however, provide some variation in the sound, which is further provided by the dynamics of the many tempo changes and the dizzying amount of riffs. The contrast between the fierce and fast-paced pieces and the slow, menacing passages constantly grinding towards a climax, give ‘Hollow Void’ its very blackest beauty.

Summarizing, ‘Hollow Void’ will, just like ‘Jacob’s Ladder’, most likely be another Hell Militia album that will divide Black Metal aficionados. Again the album offers no easy listening sort Black Metal, it does require a certain penchant for unorthodoxism and the listener should definitely not be averse to a good slab of atonal dissonance and convoluted song structures in which no riff lasts longer then only a few moments. It does bring some nice and grinding, almost catchy riffs in a quite few of their songs, but this is certainly no Watain or your back-to-basics Darkthrone kind of Black Metal band. It is also fair to conclude that vocalist RSDX passed his debut with flying colours. It isn’t too far off to state that he has been able to fill Meyhna’ch’s shoes without any significant loss of Hell Militia’s distinctive vocal sound. And for anyone who, despite this, still misses Meyhna’ch’s presence, he still joins in on the closing track.