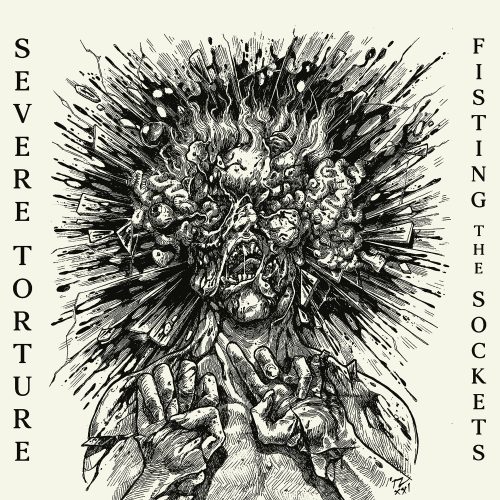 Dutch Death Metal is mainly linked to the more classic bands from around the 90’s. Of course, bands like Pestilence, Sinister and Gorefest have been of significant importance for the local (Death) Metal climate, and some of these bands also did well internationally. However, when we talk about the best Dutch Death Metal bands, besides some of the obvious names I invariably mention Severe Torture. The first two albums and especially the debut ‘Feasting On Blood’ (2000, Hammerheart Records) are ingrained in my DNA. In the early 00’s, the Death Metal scene was mainly all about hardball, (slightly) technical and gore-drenched American styled Death Metal. Severe Torture, which at the time drew its main musical influences from Cannibal Corpse and Dying Fetus, was the right band in the right place at the right time.

In the years that followed, they toured with Macabre and Cannibal Corpse, among others, and signed a record deal with Earache Records. In the meantime the whole world had become acquainted with these Dutchmen. Musically, they lost that extremely brutal sound a bit and gradually added more melody to their music. That first showed on the their Earache Records-debut, ‘Fall Of The Despised’ (2005). That was also the point that I started to lose interest in the band a bit. I still kind of liked that album, but I missed that clattering bass, the technical riffs and that all-out war aggression. As a Dutchman, it was impossible to ignore them, they were basically on every Dutch stage and they always continued to put on very convincing shows. But after ‘Fall Of The Despised’ I didn’t hear another full-length album anymore.

The fate and joy of being a reviewer is that sometimes you are pointed to bands you had kind of lost sight of. For instance, I was recently positively surprised again by Krisiun and Belphegor’s latest albums, among others. Though I do not want to say that ‘Fisting The Sockets’ has blown my socks off again nor is the material on offer of a similar order to that of my much-loved ‘Feasting On Blood’ and ‘Misanthropic Carnage’ (2002, Hammerheart Records), but it certainly didn’t disappoint me. To properly contextualise this new EP, the first new material since 2010’s ‘Slaughtered’-album, I listened to all the albums (again) and with all that in mind, ‘Fisting The Sockets’ sounds like nothing more than a logical next step. The slightly more melodic approach the band took many years earlier now seems to be a bit more balanced with the still substantially solid Death Metal. It is also still technical, albeit that the clearly American approach of the first two albums is no longer as obvious. Compared to the last album, the just-mentioned ‘Slaughtered’, the band does seem to have a heavier approach, possibly the 12-year hiatus has provided the band with new energy. All the musical elements are held together well by vocalist Dennis Schreurs’ very recognisable voice. That is one ingredient that never really changed over the bands’ 25-years of existence.

This 3-track mini CD, with a playing time of less than a full fifteen minutes, is a very welcome sign of life from a very worthwhile Death Metal band. It is unclear to me whether this is a prelude to a new album, but despite still very much being in love with ‘Feasting On Blood’ and ‘Misanthropic Carnage’, I had an extremely good time with ‘Fisting The Sockets’ and I do look forward to new material. And speaking of Severe Torture, those first two albums I mentioned so many times in this review are currently being re-pressed on vinyl by Hammerheart Records, just so you know. (FelixS)