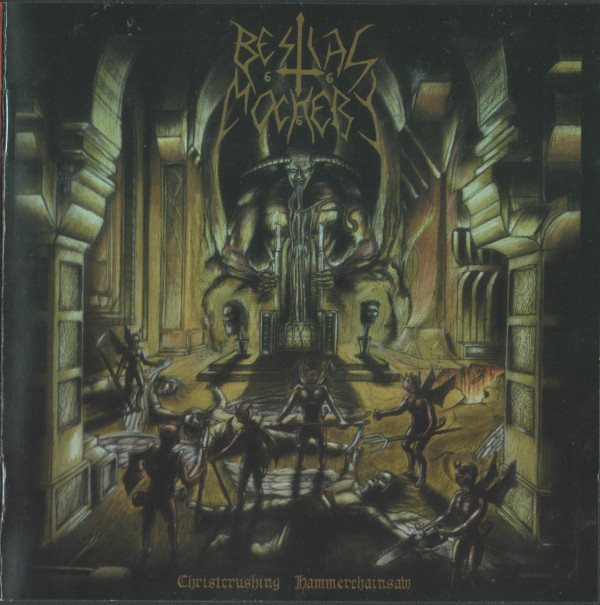 When it comes to ultra satanic wicked & primitive black/thrash, the name of Bestial Mockery would probably emerge as one of the best examples of this. Well, this now split-up band has plenty of releases on their backs, all of them have raised a cult status, proof of this is the re-release of their debut 2002 full lengh album “Christcrushing Hammerchainsaw” but in 2009 under Time before Time Records. This re-release comes as Lp & Picture Disc as well, so it’s a cool item for collectors, musically, is pretty much the same album, so I will focus this review on the music, thinking in those that haven’t heard of them yet.

This is by no means a technical or polished nice band, no way, Bestial Mockery presents here a very rude face, with material that relies on a very simple but effective combination of old school thrash elements with some other concepts of old black metal, especially the voice, that is 100% black. Even when the record was recorded in 2002, sounds much older, probably due to the plane and rustic sound production that allowed them to gain so many fans around the world. I feel some “typos” on a couple of notes of the bass lines, but I don’t know…that’s part of the whole thing…having the experience of having the band playing in front of you, awesome!!!…or the title track “Christcrushing Hammerchainsaw”, with that chain saw at the beginning adding a twisted feeling to their music, the 1st time I’ve heard such combination, brilliant by the way!!!

So basically there you go, an extremely valuable item of collection with material conceived only for the most orthodox segment of the underground, the most purist…however, if you listen “Raise the Chalice”. after some seconds you will found yourself unconsciously moving the head, very healthy, especially when trendy wimps a la Behemoth infest the scene nowadays. (Master Butcher)