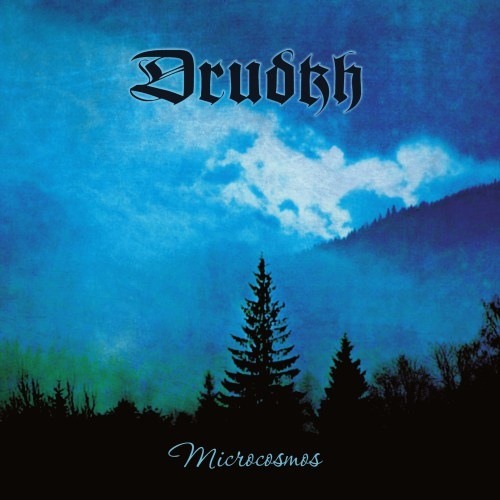 Releasing seven full-lengths in seven years from a band is a rare sight to see. Yet, Drudkh have managed that since forming in 2002, releasing their first, entitled “Forgotten Legends”, in 2003 and two in 2006, “Blood in Our Wells” and “Songs of Grief and Solitude”. Getting a bit lost at sea after 2006, the band has struck back with “Microcosmos”, wielding a rather humble arsenal of folk-tipped black metal.

Drudkh have a soft, poetic essence to it on “Microcosmos” not felt in your typical blitzing black metal band. From the intro on into “Distant Cries of Cranes”, the music is surprisingly subtle despite the loudness of the instruments and Thurious’ masochistic wailing. This is a wondrous thing, but definitely not perfect as with this plus, there is a swarm of minuses stemming from this piece of Drudkh’s character. Large chunks of songs tend to taste a bit bland as they slow down and fall into an unhurried musical state, like in the beginning of “Decadence” and mid-way through “Ars Poetica”. To add to it, the first and last tracks don’t have any real substance as a short intro and outro.

Short (For most bands in this genre), un-sweet and not so straight to the point, “Microcosmos” is an ode to how the many beautiful and pristine microcosms in the world join up to make up one big, ugly, stinking macrocosm. However, unless you’re on the side of the fence that absolutely worships this band as near divine, “Microcosmos” will receive a modest amount of plays. Nothing special about the album makes itself known, and has the same excitement level as sitting by a creek for almost 40 minutes. This newest mark on the bedpost of Drudkh suffers a masochistic undoing as the band has released an album that sounds incomplete and rather empty. (Yulon)