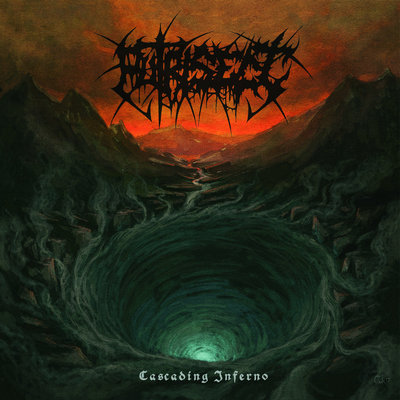 Putrisect do not seem to be a band that exists to push death metal into any new territory. This exists to be bleak and extremely heavy Death Metal that owes a great deal to Incantation in terms of sound and tonality. Original? Probably not. Awesome? Absolutely!

Dark, melodic riffs twist around rapid fire blast beats before being covered in a layer of vocal sickness that just drips with ugliness. Tempo changes are pretty common and a lot of the Incantation influence shines through when the band slows down to a crawl. Suffocatingly heavy power chords are mixed with Autopsy like melodies creating a lot of atmosphere while pushing the album in different directions. There are definitely some stand out moments throughout. The punk like sections of “Desolate Infinity” and the cool rhythmic start to “Godless Malice” definitely help to make the album diverse and not just an all out blast fest.

Fans of dark and doom influenced Death Metal will need to check this out ASAP. The band draws inspiration from Incantation but before the end of the EP you will realize that the band has a lot more to offer than just being an Incantation clone. This is well written, energetic and absolutely mandatory listening material. (MikeH)