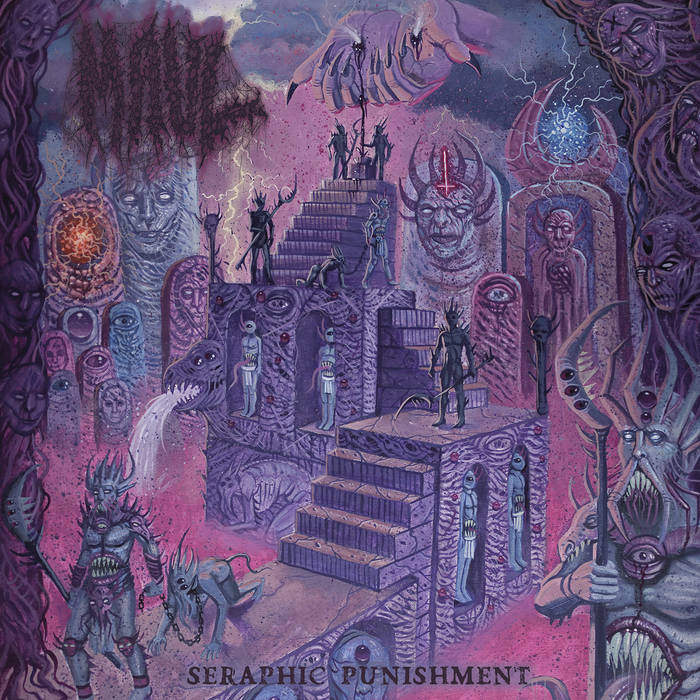 A lot to digest for Fargo based quintet Maul & crushing premiere LP “Seraphic Punishment”. Formed in 2017, persistently been spewing material within a five year span releasing three demos, two EPs, & multiple splits with acts like Avarice, Torn In Half & Wharflurch.

Fusing Death Metal, Doom, and Hardcore styles within a mid-tempo range, vocals stand out fluctuating from guttural to raspy growls along with intricate melodies coming from dual guitar work & bass, tied together by versatile drumming that give this band so much momentum in their compositions it’s intoxicating!

By far one of the best album covers I’ve seen for 2022 done by Jason Barnett, has one of my favorite color palettes with a scheme of rose, cerulean, & amethyst revealing an otherworldly scene reminiscent of vintage sci-fi book covers.

Within its nearly thirty seven minute cycle half of the tracks, including the album title taken from live album “Extractions of The Tomb”, are from previous material in their discography. “Monarchy of Mold” & “Infatuation”, from “Monarchy of Mold” EP along with “Deity Demise” & “Buried In Resin”, from “Deity Demise” EP. The differences are the refined production, emphasis on melody to give off a rapturous timbre, and imperious cadence which I do favor the original recording of raw vocals on “Buried In Resin” since this version was a bit more tamed & guttural this time around but still great nonetheless.

Speaking of vocals, do admire the bits of deep regular speaking on “Seraphic Punishment” & closer “Carrion Totem” akin to how Phil Anselmo would do in Superjoint Ritual. Guest feature from Aaron Dudgeon (Phobophilic) on “Repulsive Intruder” gives a chilling sentiment with his additional shrieks. Love the build up on elongated opener “Of Human Frailty” & the dominant Hardcore style represented on this particular tune & of course favor “Oracular Burial Grounds” with its virulent tone & giving some shine on bass work over others featured ending with a foreboding note.