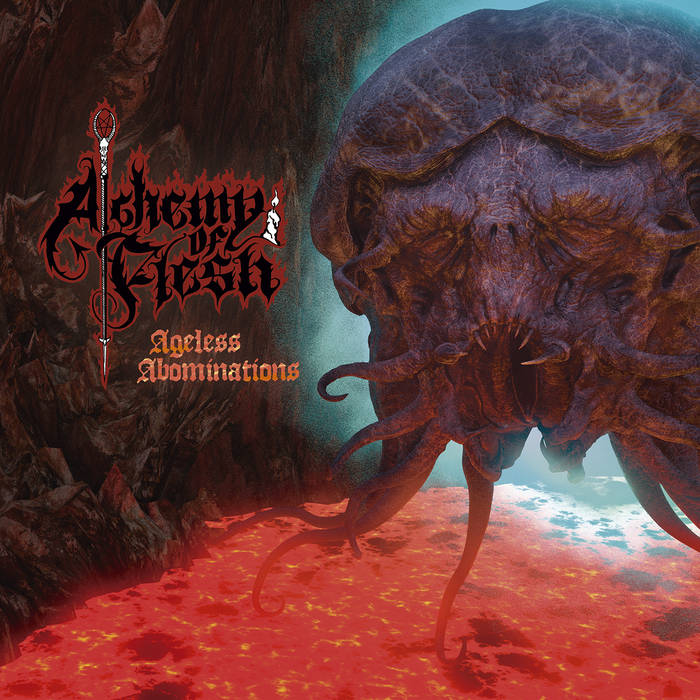 Fans of Morbid Angel…THIS is the shit!

The solo project named Alchemy of Flesh from Tim Rowland crushes the scene with this splendid debut album titled ‘Ageless Abominations’. This guy did everything on this release concerning instruments, lyrics, riffs, etc. He choose the dark side of the Florida Death metal sounds, with as said, a lot of Morbid Angel influences in it.

Opener ‘Pain Primordal’ is filled with blast beats that circle around your head, track ‘Sleeping Chaos’ has great riffs that compete against each other to become the best and keep on dragging the entire length. The vocals are mighty, and sometimes even do remind me of Bloodbath, but the overall crushing sound is excellent, its brutal as fuck and the production is thick and fresh.

It’s not originally at all, but the quality of this album must be pointed out. He perfectly knows when to change the rhythm, start or stop a riff and knows when the punch and brutality is needed in a track. Mostly mid paced instrumental parts are the key word, but the guitar sound is impeccable and makes this a contender for the chart lists of many death metal fans. The art work is done by Mike Browning – so the connection with Morbid Angel is completed.

If this was an album from the pioneers, it would be among their top. Don’t argue, just embrace this one! Hint: listen to ‘Slipgates to Annihilation’ to absorb Tim Rowland’s perfection and get dominated by it. (Fredde)