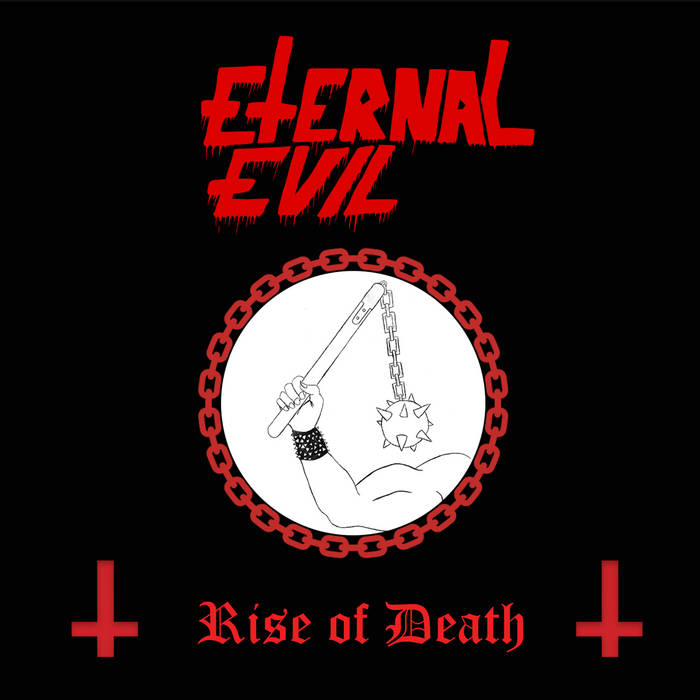 Every metalhead goes into an era of favoring a grainy, lo-fi production, vigorously aggressive guitar riffs with a mandatory solo to be cherry on top, angrily discharging raspy, croaky styled vocals to pair;  summing up the sometimes cringey Thrash Metal genre. Made a small comeback in the later years of the 2000s since its mid-80s reign, most credible is German scene; giving us Kreator, Sodom, Assassin, Destruction, and Exumer to name a few!

When it comes to young faces of Eternal Evil, these guys are slowly morphing into their craft, taking an initial step in mimicking their influences and paying homage to whom they follow musically to establish their own style soon after. Everything about these guys is solely based around the mid 80s, from their name to the album cover to just general sound. That being said, interesting to note that this thrash quartet is based out of Sweden, because the production reminds me of Sepultura’s “Morbid Visions”, extremely raw and feculent.

Their band name is inspired by a 1985 flick with the same name about a director who finds out about astral projection! Cover artwork reminds me of Hallow’s Eve (1985) LP “Tales of Terror”. Five tracks clocking in at 14 minutes, takes you back into a…simpler time. Skipping past the minute intro, “Rise of Death” you already get a sense of who they aspire for in their music. It’s pure 80s essence, especially with those Slayer “Show No Mercy” era solos that fit their way in. “Stab of The Blade” you can hear more of the bass amplified, vocals simulating Mille Petrozza, steering on the edge of Black Metal riffs. Drum work seems more apparent in “Succubus”. “Witch’s Spell” continues the same dynamics, leading to outro with more Slayer styled solo work to finish it out.

Not bad for these young bucks to soak in the era’s sound, perhaps by next release they’ll channel into something that’s inspired but generate contemporary tone to it, maybe blend more Black Metal riffs & compress in tighter structure. (Tori Belle)