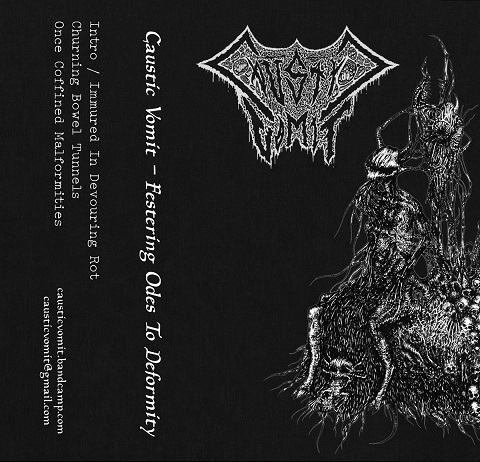 Ah the sweet sweet sound of a baby gurgling in its crib. Birds chirping outside the window on a bright sunny day, the whispered sweetness of a loved one, all of these things are completely and utterly a moot point when listening to this, and I wouldn’t have it any other way. Yes, Caustic Vomit where not kidding themselves when they decided to name themselves thus, for this shit will surely eat through anything you pour it on, and play it near the old, the infirmed, the enfeebled, or anyone already feeling particularly nauseas, and vomit will most likely be the outcome.

But good vomit it is! Not the chunky kind that gets caught in your throat, although it does burn a little, this is as good a spew as you will ever have, or hear for that matter.. Opener “Intro/Immured in Devouring Rot” brings the Doom, and this Doom is carrying a very heavy shovel with which to pile cold earthen goodness upon your very own self. This sounds like it was recorded deep in some underground unholy chapel, not muddy at all like some of this stuff can be, but each and every riff has a certain almost chime to it, like the resonating sound of a giant bell that tolls away as your life nears its end and you see Death himself standing before you with hand outstretched and scythe at the ready. Absolutely dismal as all fuck, and then they let loose a little, and a little is a huge understatement.

When they do open the very gates of whatever hell or eternal damnation you may choose to believe in, it is to the sound of the thunderous applause of all the ghastly horrors you imagined as a child. All of them rushing out from under your bed, or opening that closet door and appearing before you in the very form of Death incarnate. The Reaper cowers before their might as he should, and it is them now who are throttling the very life out of you, and then they slow down again to give you a more pleasant, if that word was at all appropriate for this kind of music, journey over the threshold into the land of the eternally damned.

And this is only the first track, you are already fucking dead as a doornail, and where can you go from this foul fate? On to track two, “Churning Bowel Tunnels” of course! And shit a brick if this stuff doesn’t have a swagger to it that will make you want to defecate in your own pants. This one IS chunky, starts out the complete opposite of the first one with an almost Celtic Frost kind of feel about it, and before they head back into a more Doomesque kind of thing, you may need to go visit the toilet and clean yourself up. Actually, you are already dead and have soiled yourself as a natural part of the dying process, so no need to be alarmed or embarrassed, just kick back and enjoy the ride.

It has to be said that these are long songs, all hovering around the ten minute mark like a swarm of flies does on a pile of shit and or rotting corpses, but they do not at all stink like some Doomy crap can, nor are they bloated with repetitive riffs and full of dung just to be self important and make the misery totally unbearable. When they do throw in a solo, it has a sharp kind of feel to it, like the scythe would have if this fine bunch of gents had of but let The Reaper do what he is paid to. Onwards to the final destination we go.

“Once Coffined Malformities” may as well be the title of their biography if one was ever written. Agin the way of your demise flashes before your eyes, but almost in more plain and simple terms to begin with, and then the monstrosity decides to talk to you, directly to you, and what a gurgling dry voice it has. The breath of a foul eternity whispers in your once living ear, it is probably a good thing you cannot smell the stench of the millions of souls it has digested over it’s existence, for that would surely drive you even more insane. Riff after riff of endless suffering, wave upon wave of hate alternating between the dull hammer of the toothache you once had as a child, and the very pain of having your heart ripped out by that girl who you loved that ran away, that child you lost, that person that choked on their own vomit when all you could do was stand back and watch. You are helpless, you are Doomed, and your at the end of the journey.

Nothing but eternal oblivion awaits, and you can hear the dark angels lining up to give you the flogging of a lifetime. Enjoy. (The Great Mackintosh)