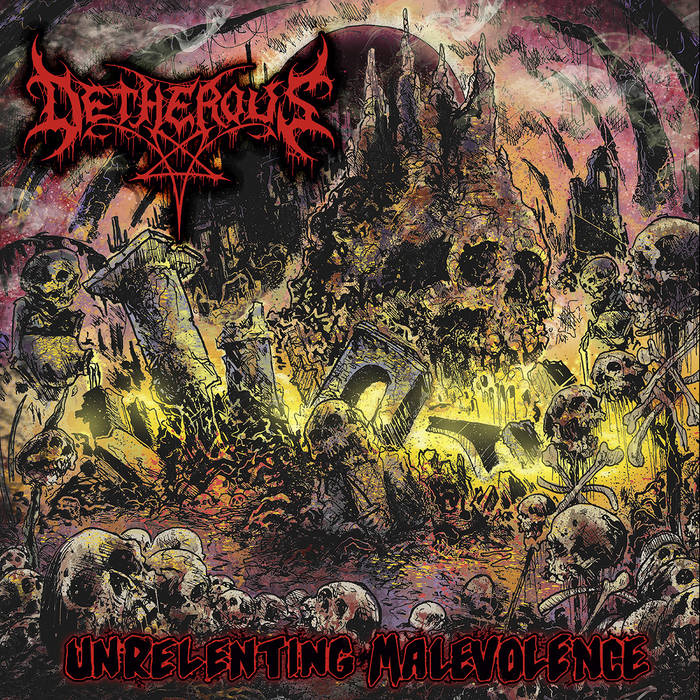 When talking about metal there are certain scenes that basically are brought onto the table all the time. I guess you all know what I mean when I bring up the Florida Death Metal scene, the Swedish Death Metal scene or the Norwegian Black Metal scene. It sometimes bothers me that people seemingly forget about other as important scenes. Just take the Dutch scene or the Canadian one. The latter has brought forth so many influential bands it just seem unjustified to forget about Canada. Fortunately Darkthrone did record a song entitled ‘Canadian Metal’ to underline said importance.

Just take this introduction as my personal need to get this off my chest. But we are dealing with a Canadian band here; Detherous from Calgary who have been around since 2014. I personally got to know them through 2019’s debut album ‘Hacked to Death’. That album was one of the highlights in that year and the album finds is way to my stereo system on a regular basis. Based on the impact that album had on me I was very curious to the sophomore album.
Due to some line-up changes ‘Unrelenting Malevolence’ was recorded as a duo with some session members helping out. Listening to the result this hardly matters.

To me ‘Unrelenting Malevolence’ comes across as a logical follow-up to ‘Hacked to Death’. The ingredients are pretty much the same; ferocious, in your face death/thrash.
When I have to be critical I could say they bring nothing new to the table. Especially for those who grew up in the 80s and 90s of the previous century you cannot call this original. Then again I’d say 99 percent of the albums that were released post-millennium can’t be considered original. What I do like about Detherous is that they play aggressive Death/Thrash. Now that’s a style you don’t hear that often anymore. In that sense it is quite refreshing.

Listening to this new album I had to think more than once of Dutch band Dead Head. Especially when it comes to intensity and most of all the vocal delivery. But there’s one band that is the ultimate comparison and that’s the mighty Demolition Hammer. Especially their first two albums are the blueprint of what Detherous is doing. As a matter of fact Detherous even covered Demolition Hammer’s ‘Skull Fracturing Nightmare’ in this new album. So if you are a fan of Death/Thrash that grabs you by the balls and has some killer guitar leads and furious riffs you cannot let this one pass you by.