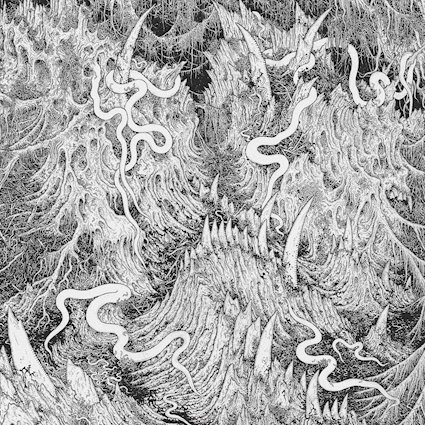 Me Saco Un Ojo Records have teamed up with Rotted Life Records to unleash a new two band split release featuring Russian obscure Death Metal trio Gosudar and Doom laden USDM band Malignant Altar. This fetid four track release will see a vinyl release in Europe (MSUO) and an all formats release in the US. (RLR)

Gosudar are first up with ‘Mortified Transformation’ and ‘Domination of Irreality’ which sports a harrowing atmosphere of gruelling and sinister Death Metal, either played at a crawl for maximum gloomy tones, or at a faster pace for sheer crushing brutality. There is a deeply malevolent sound to this bands guitar play; the riffs are drenched in primordial swampy groove whilst at the same time sound thunderous and devastating. Accompanying the savage guitar tones is a whole bombardment of drumming ferocity from behind the kit, from a drummer who is equally as at home with out right punishing brutality as he is with slow, atmosphere building tones. The vocal work hold no deviation from marauding growled ferocity which is impressive in its unstoppable hostility, and the two tracks on offer are completed by a filthy amount of bass groove. Gosudar certainly know how to put together a gripping and engaging Death Metal track or two, that’s for sure!

Malignant Altar and their offerings of ‘Malfeasance (inexorable Enmity)’ and their cover of Imprecation’s ‘The Awakening of the Majestic Darkness’ have a more belligerent tone to both their riffs and vocals, and what they lack in haunting sinister vibes they more than make up with colossal drum tones, thunderous punishing bass lines and crushing, grime covered guitar leads. There is also more of a flair for the guitar solo here and Malignant Altar are certainly not averse to the odd spot of technicality in their guitar play, or for that matter a spot of dark sounding synth undertone when the moment calls for it. Its the doom laden monolithic riffs and abyss dwelling growls during the Imprecation cover that really impress me though, and all in all I’d have to say that both bands contrast each others ferocious, gnawing and carnivorous style superbly.