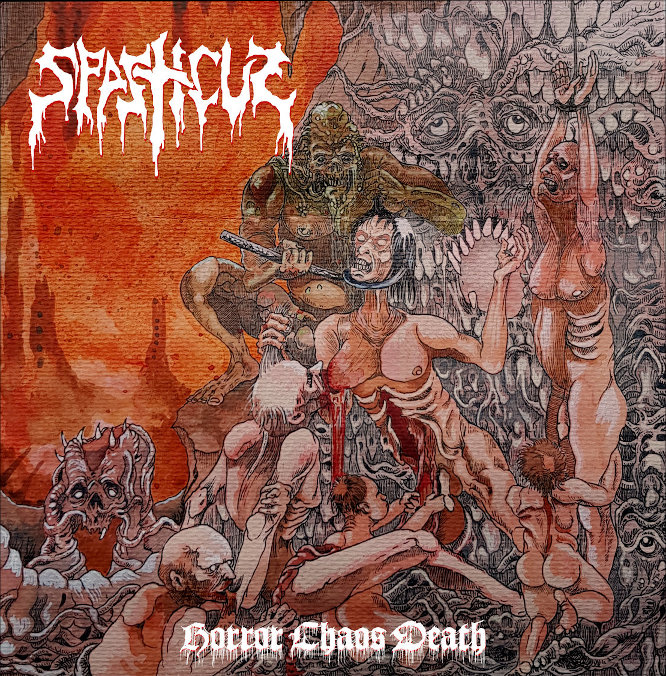 Back in ’88, at age 12, I got hospitalized for two weeks. Couldn’t concentrate at school, energy levels were off the charts, annoying the shit out of every adult I met. ADHD or ADD weren’t “invented” yet so they labelled me as a high energy levelled, hyperkinetic kid or as my dad put it simply, his little spastic boy. Life has sucker punched me in the teeth a few times these last two decades, so, I have calmed down, …a little bit.

The tracks Spasticus slammed on tape and the energy they create are a perfect soundtrack to those energy consuming years. “Horror, Chaos, Death” contains 5 fragmentation bombs, and they all spit rage into your fvkkin’ face. “Birth to the plague” immediately kicks you in your crusty nuts with a chaotic blast only to get bogged down in a filthy mid-tempo banger. “Chemo-whore” reminds me of the first time I heard Speckmann’s Deathstrike, that raw unrelentless up-tempo pounding, simple yet so effective, as the title track mixes the rancidness of Autopsy with that maniacal Impetigo vibe.

Palermo based Spasticus creates a raw form of proto-Death Metal, with bits and pieces taken out of Grindcore, Thrash, old school Death and War Metal, melting it all together in a nerve wrecking whirlwind with Krost Von Barbarie’s hysterical throat tilting all this madness right over the top.  So what, if not all is played as tight as my grandma’s pelvic floor muscles, it’s the fvkkin’ attitude that counts and the attitude is spot on my dear readers. Be sure to check out this (filled to the brim with madness) tape. (Franki_boj)