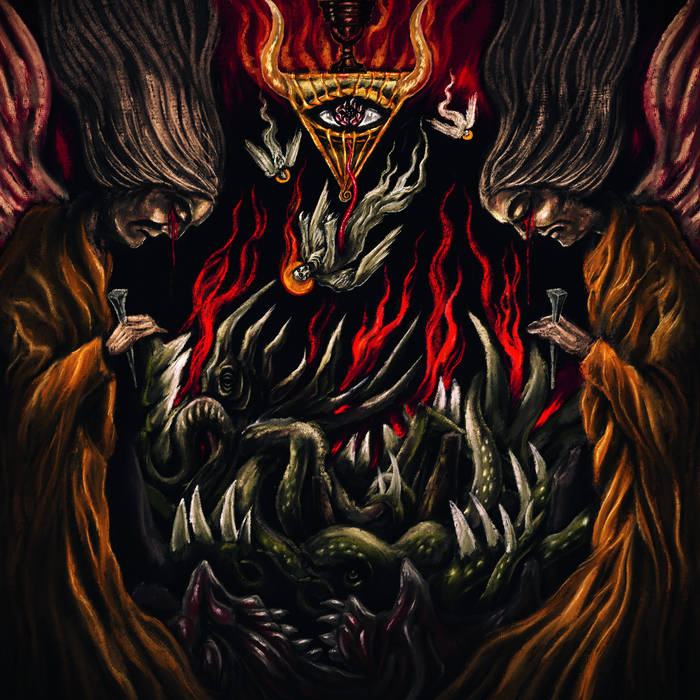 While preparing for the review for Father Befouled’s most recent album, ‘Crowned In Veneficum’ (Everlasting Spew Records), I noticed that I had missed out on a split 7” with Exaugurate and despite the fact that this split EP isn’t exactly new anymore, I think it’s still worth bringing it to your attention. If only because of the relatively unknown Exaugurate.

But, Father Befouled opens the split with two songs that sound just like any of their previous work. Deep and heavy Incantation-like Death Metal with interesting dynamics and enough tempo changes to keep it interesting. A few slightly technical twists do occur, but mainly it is riff-heavy Death Metal with a certain groove and a considerable eerie atmosphere.

On the other side we do find Exaugurate, a new band for which this split 7” is only their second release. But the musicians are anything but noobies. In their ranks we recognize bandmembers who are or were in bands like Cruciamentum, Ectovoid, Meathole Infection and Grave Ritual – not the least interesting bands in the current Death Metal scene. And although these guys are getting their influences and kicks from the same bands, their brand of Death Metal sounds way more lethal and breathes an authentic evil atmosphere. That haunting atmosphere is created by repetitive rhythm guitars, quite creepy lead guitars and utterly deep vocals. These guys also know how to write a song, it is clearly not a collection of riffs, but a well-crafted song. With lots of recognizable hooks and tempo changes. It is no surprise that these guys are now signed to Profound Lore Records. Much deserved.

I know split EP’s are no battle-of-the-bands kind of competition, but this is a clear 10-8 round for Exaugurate. No doubt. So, if you are not sure, with all due respect, whether Father Befouled is still the band to spend your money on, you can still try to get this split EP, if only for that one great Exaugurate track.