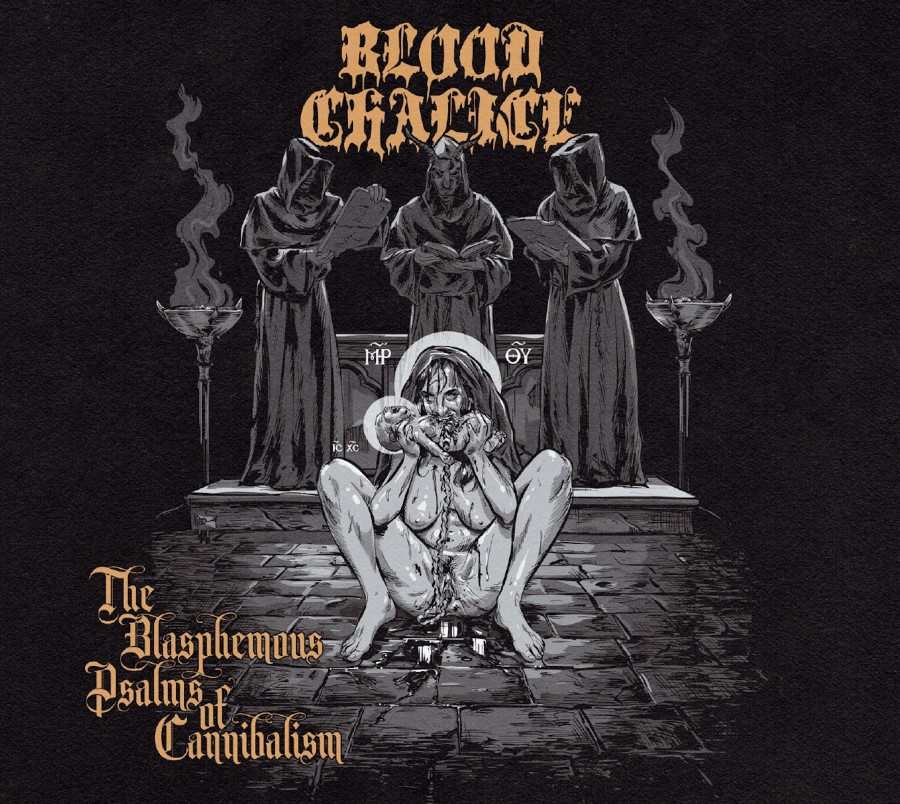 ‘The Blasphemous Psalms of Cannibalism’ is the second full length release from Finnish Black/Death Metal band Blood Chalice, and their first release in five years, since their debut ‘Sepulchral Chants of Self-Destruction’. This new opus is to be unleashed next month on cassette and CD by Werewolf Records.

Rarely do I hear a band who can flick so effortlessly between Black and Death Metal, but listening to the opening track ‘The Black Mass’, I couldn’t help but marvel at the bands ability to produce ultra chaotic Black Metal brutality, fast paced, ravenous, War Metal like, and then the next they’ve dropped the pace down to a sickeningly satisfying crawl of creeping, brooding Death Metal straight from the depths of some tar infested swamp. And that in essence is what this album is all about. Total, unabated Satanic carnage, a blasphemous tirade of scorching Black Metal riffs, a drumming display that creates a cacophony akin to that of a medieval army storming into battle, thick rumbling bass lines and a putrid display of nastiness from the vocals.

My personal preference is for the slower, menacing Death Metal tones of the aforementioned opening track, as well as ‘Antichristian War declaration’, whose war cries and monolithic riffs create a crushing maelstrom of savage barbarity. That said, there is no denying the raw, unrelenting power of the balls to the wall, all out venomous attach of the bands Black Metal prowess. ‘The Blasphemous Psalms of Cannibalism’ oozes sickness and depravity, and is delivered in a tornado like whirl of fury! (Luke Hayhurst)