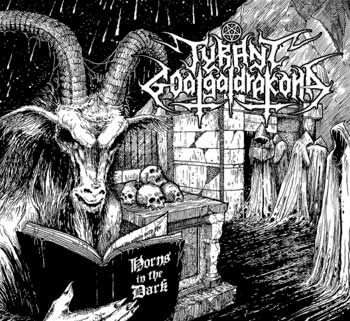 This is the long-overdue vinyl version of the “Horns in the Dark” release which was released back in 2013. Both versions have great artwork made by Mark Riddick. Hungarian Old School Death Metal act Tyrant Goatgaldakrona pleases the unholy ears with a combination of dark and gloomy Death Metal in the vein of Incantation, Cruciamentum and Dead Congreaetion as well as Carnage and Entombed. “Horns in the Dark” is nothing stunning, but certainly decent. (Ricardo)

If Incantation happens to be your favourite band then this hard to pronounce Tyrant Goatgaldrakona is something that you must hear. They come from Hungary and the object of this review is the re-release of their debut “Horns in the Dark” (originally issued in 2013) by the Hungarian label Stygian Shadows Production. With two additional bonus tracks, “Horns in the Dark” offers to the listener nine tracks of dark, pummelling Incantation-worshipping death metal. The two guys in Tyrant Goatgaldrakona (Grave Desecration and Necrosodomy on guitars/bass and Hellfire Commander of Eternal War and Pain on drums/vocals) know how to create brutal and grim sound for the delight of anyone into this kind of mu-sick. They both participate in other projects like Morbid Carnage, Coffinborn and Necrosodomy so they are experienced musicians and know how to handle their instruments. The sound production is on a very good level and the black and white cover artwork of the re-release is done by Mark Riddick, who presents one hell of a job. So do not waste your time, raise your horns in the dark and enjoy the debut of one very promising Hungarian band. (Zvetan)