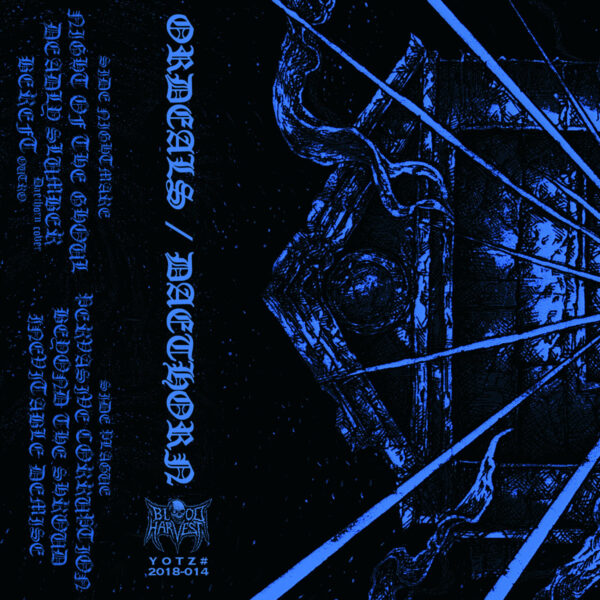 Blood Harvest Rec’s 2018 split album cassette with Ordeals & Daethorn flew under my radar until now, largely due to my not knowing of either band, and I’m sure that’s the case for many metalheads but it’s a damn shame because both acts are some serious heavyweights, featuring members from established groups that are considerably respected in black metal circles. New York City’s Ordeals is a two-piece with the guitarist from the spectacularly filthy blackened speed metal outfit Throaat, and their branch of this attack is suitably nasty, with an ominous intro of some raving madman setting the dark tone for “Night of the Ghoul”, which blasts in on what sounds to be programmed drums (although this in no way detracts from the solidity of the sound) and some really fucking grotesque vocals from “Zealous Hellspell” (don’t judge) that alternate between a guttural gurgle and a full-chested roar, as well as a powerful, well-placed yell later on. The melodic riff that closes out the track is a little monotonous, but otherwise it’s a great black/death metal song that definitely piqued my interest. The next track is a cover of the other band on the split, “Deadly Slumber”, which was originally included on Daethorn’s split with the band Wakboth, back in 2002. Anyway, it’s a slower kind of crawling number with the vocals being more rasped, hissed and growled, showing a pretty diverse range from Mr. Hellspell, while staying in the supernatural occult/horror theme established at the start, and seguing into the close of their side of the tape with an eerie instrumental outro. All in all a fairly interesting listen so far.

Daethorn, hailing from Paris France, is a solo effort from the bassist of satanic black metal beasts Merrimack, whose discography I very much enjoy. “Pervasive Corruption” comes ripping right out of the gates with a caustic blasting fury of tremolo shredding and larynx-stripping screams and then ends with a rather jarring abruptness after just two and a half minutes, picked up by the more mid-paced resonance of “Beyond the Shroud”, a standard 2nd-wave BM style banger that delivers the darkness and malice we thrive on, with just enough of a melodious doom aura present to make it memorable as it fades out. “Inevitable Demise” closes the clouded curtains on this battlefield and carries just as much ferocity and violence as the title implies, picking up the speed and bringing those brutally vicious, agonising screams to the front. The drums go ballistic here, but are kept under militant control as the conflagration rages on, and the menacing guitars slap you into submission like black waves of leaden sea during a storm. This split is a very satisfying, if somewhat brief (19 minutes) release from Blood Harvest, but it serves as a great sampler for each band as well as their other projects, and fans will definitely want to add this to their collections.

Fatal volley: A scathing and horrific onslaught of demonic wrath sure to appease the bloodthirst of any ravenous black/death metal freaks. Buy or die!! (Terrorgasm)